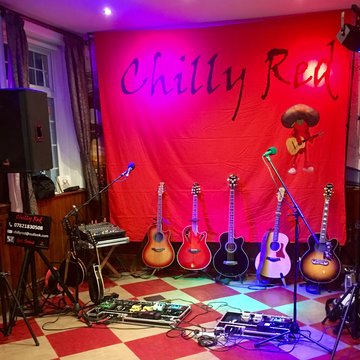 Ian Burke and Mark Williams formed their first band together whilst at school 41 years ago, back then everything was heavy metal and glam rock, their musical taste and experience has widened since then. The band name Chilly Red came from combining their school days nicknames Mark 'Chilly' Williams and Ian 'Red' Burke (latterly known as Red Hot Red in 80s rock band ROX). The band was formed in 2015 to play a one off summer solstice gig. which rekindled the live performance bug and with the addition of Helen the band has gone from strength to strength gigging on average two to three nights a week. Ian Burke started as lead guitarist with 80s rock band ROX and has played some of the UK's most prestigious venues including the original London Marquee Club, Hammersmith Odeon and Manchester Apollo to name but a few. Now on his third solo album, Chilly Red is a perfect outlet for his acoustic playing. Mark Williams is a blues / folk influenced musician who has played in many bands and as a solo act throughout the years in various roles, including vocalist, bass player and guitarist. A seasoned singer and acoustic player Mark is soon to launch his first solo album of original blues based music. Helen Burke has played flute for many years and joins Chilly Red to add Irish whistle, vocals and percussion to enhance the acoustic vibe. As well as their own original songs, Chilly Red perform their own unique arrangements covering songs by some of the great artists spanning the last 50 Years. A full Bob Marley medley and extensive Celtic set, shows the broad span of material included to cater for most musical tastes. Set list includes songs by..... Elvis Costello, Roy Orbison, Mumford and sons, Newton Faulkner, Joan Osbourne, Led Zeppelin, Snow Patrol, Neil Young, The Pogues, David Bowie, The Everly Brothers, Van Morrison …… Plus many more

About an hour.. but if needs be we can set up in around 45 mins

If given enough time we can learn requested songs

Too many to mention

Great guys. Really professional and everyone enjoyed it. Will be booking them again 👍🏻👍🏻👍🏻

A must see band lovely guys with plenty of character and fantastic variety of music ... what more can I say been hooked since I First saw them

Chilly Red are a brilliant trio, singing and playing everything from Irish music to Reggae. They certainly get the party going.