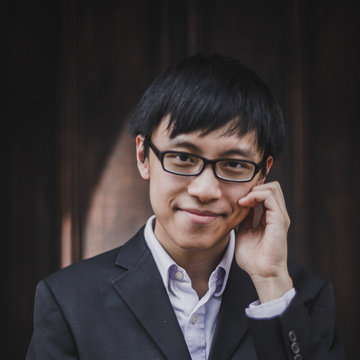 Acclaimed for his 'sheer pianistic panache' and 'impressive sense of performance and flair', Hong Kong born pianist Chi-Hoi Cheung has found success at several competitions including the Brant International Piano Competition, Watford International Piano Competition, Springboard Concerto Competition, and Coulsdon and Purley Concerto Competition. He is a recipient of numerous awards including the Help Musicians UK Postgraduate Award, Musicians’ Company Doris Starke Prize, and Appelbe Piano Prize. He is a Yeoman of the Musicians’ Company in London. He has performed as a soloist, recitalist and chamber musician at major venues across the UK including Royal Albert Hall’s Elgar Room, Steinway Hall, St James's Church Piccadilly, Birmingham Town Hall, The Barber Institute of Fine Arts, Charlton House and Pallant House Gallery. He made his concerto debut in 2017, performing Shostakovich’s Second Piano Concerto with Worthing Philharmonic Orchestra under the baton of Dominic Grier to great critical acclaim. He is also a member of Duo Bauhinia with flautist Sirius Chau, whom will be making their debut at The Bridgewater Hall after winning the Manchester Mid-day Concert Society audition. Chi-Hoi has recently graduated from the Royal College of Music in London with a Master of Music with Distinction, having previously earned his Bachelor of Music with First Class Honours at the same institution. His studies had been supported by a Hilary Fabian Award and Gordon Calway Stone Memorial Scholarship, ABRSM Jardine Matheson Fund, and the Croucher Foundation Hong Kong Award. His teachers at the RCM had included Gordon Fergus-Thompson and Leon McCawley. He has also participated in masterclasses with Dominique Merlet, Artur Pizarro, Leslie Howard, Alexander Bonduriansky and Peter Jablonski. In summer 2018, Chi-Hoi attended the Aspen Music Festival and School as a Polonsky Foundation Fellowship holder, studying with Hung-Kuan Chen. During his time in Aspen, he was accepted into the Chamber Music Program, working with Nancy Goeres. He was also invited to participate in the Harris Concert Hall Masterclass series with Inon Barnatan. He has performed at all major concert venues in Aspen including the Harris Concert Hall, Aspen Centre for Physics and Aspen Chapel. A Graduate Incentive Award holder, Chi-Hoi is currently pursuing a Doctor of Musical Arts degree in piano performance at University of Cincinnati College-Conservatory of Music, with a cognate in piano pedagogy.

His Scriabin showed poetry, an almost unerring sense of line and quite sensational pianism.