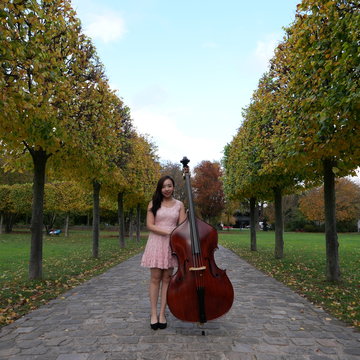 Born and raised in Hong Kong, Phoebe Cheng has completed her Advanced Postgraduate Diploma at Royal Birminham Conservatoire under the tutelage of Thomas Martin. She has graduated from Master of Music degree with full scholarship in June 2019. She received her Diploma in Performance and Bachelor of Music (Honours) degree from the Hong Kong Academy for Performing Arts. As soon as she graduated from HKAPA, she has worked as an Orchestral Associate in the Hong Kong Sinfonietta for around two years, and she has been working as freelance tutti in Macao Orchestra. She has participated in masterclasses and been coached by many world-renowned bassists, including Franco Petracchi, Giuseppe Ettorre, Joel Quarrington, Harold Robinson, Ödön Rácz, Lorraine Campet, Janne Saksala and Christoph Wimmer. As an active orchestral player, Phoebe has taken part in many orchestras and festivals including International Festival of Youth Orchestra in Australia, Orford Academy in Canada, Japan International Contrabass Festival, Tongyeong International Music Festival in Korea, International Orchestra Institute Attergau in Austria by Vienna Philharmonic. She has collaborated with renowned conductors such as Mirga Gražinytė-Tyla, Michael Seal, Jac Van Steen, Krzysztof Penderecki, Tung-Chieh Chuang and Lio Kuok-man. Apart from that, Phoebe has been chosen as one of the bassists, to work with Hong Kong Philharmonic in March 2013 and November 2014. Additionally, she has performed as principal bass in several orchestras including Academy Symphony Orchestra of HKAPA, Hong Kong Youth Symphony Orchestra and Hong Kong Children Symphony Orchestra. Phoebe has successfully demonstrated her leadership and communication skills as she has been chosen to be one of the representatives Ambassador to perform during the tour to the Shanghai World Expo.

‘Phoebe is an accomplished musician ... her attitude is excellent and she is a joy to work with!’

Robin I, 4 years ago