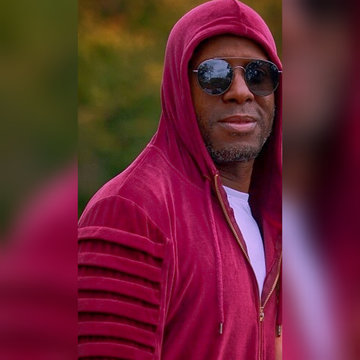 Born and raised in the streets of Cuba, to the rhythms of life that make the heart of the most musical Island in the Latin world tick, Philips Man, created the Band TRIANGULO OSCURO. Since 2007, Philips Man and true Hermano (brother) LOLO MC, alongside 6 piece band, including top-class DJ, Drum section (including trance-inducing Conga players) Guitar, Bass, Sax and Trombone players, will rock and glide ANY dance floor for ANY occasion pushing the true, Underground, Cuban sound in London, performing live for more than 170 gigs including Glastonbury, Big Chill and in London Latin Festivals and clubs or venues like Cargos, jazz cafe, Ronnie Scotts Mixing any style required, they pack a punch and always bring the sweetest sound you'd ever wish to hear. Flowing in genres including: Afro-Cuban, Salsa and Timba-tom -Afro-Latin, Hip-Hop, Funk, Dancehall, Soca, Reggaeton, seamlessly mixing all styles in his unique and ground-breaking style. Since touching down on these shores, he has worked with artists like legendary producer London Individuals L.I (rip) as well as artists including: Frankie Paul and all the top underground UK based Latin artists World Music Fusion in the highest degree. Influenced by Afro-Cuban, American and Caribbean styles, they traveled from their home in Nueva Gerona City, Isla De La Juventud to the Cuban Rap Festival in Havana, where they reached the finals, blowing away established and feared acts. 3 years later, in 2000, EGREM RECORDS produced the first in 3 ground-breaking albums that were distributed and loved worldwide! In 2001, SONY RECORDS in the USA distributed the album ‘A Moverse’. By 2002, TRIANGULO OSCURO was awarded the highest honor in the Cuban music industry, The 'PREMIOS CUBADISCO' in 2 categories, it gained a further honor in 2003. The band went on to tour in Mexico, Russia, and the UK alongside the legendary 'BUENA VISTA SOCIAL CLUB' in London. They opened the prestigious FLORIDITA in England's capital as well as being interviewed by BBC 3. 100% Original Songs Guaranteed along with old classics. Not to be missed.

The Clients love my Timing, The Music selection, and the public Animation as Mc Hyper, Presenter

the Opening night of the Floridita London 100 Wardour St, Soho, Along Side Eliades Ochoa from the Buena Vista Social Club

It will depend only of my agenda, i m very flexible. everything is gonna be ok. just let us know.

Absolutely. This is a really popular request and we actually offer this service for free. If you'd like a DJ service via our PA after the final set until the venue closes, we provide this for an additional £200

I ll do it by Previous request, The Client only need to send me a message letting my know about any especific song and i m going to bring it ready. up to 4 pieces

I will bring my Dj Equitments and Sound Systm PA only if is needed by the Client. Price of the booking will rise up to £300 I m using 2x CDJ MK3-1000 or similar 1x DJM 600 or similar 1x PA 5-8Channels 2x Microphones

Standard Prices
All prices include:PA equitments if needed, Mc anouncements and Promotions, up to 4 unique songs by request from client

DJs in the UK
DJs in St Albans
DJs in Slough
DJs in Windsor
DJs in Sevenoaks
DJs in Hertfordshire
Company
Discover
Download
Join us on
© Encore Technologies, Ltd.
Crafted with bagels and in London