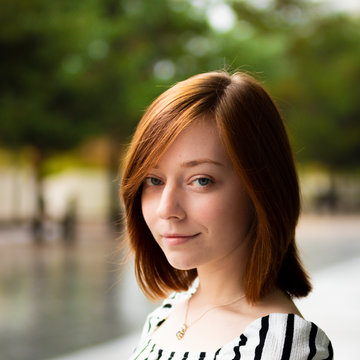 I am a 21-year-old Soprano from the south of England, studying Vocal and Operatic Performance at the Royal Birmingham Conservatoire.

Lottie began singing lessons at age six at Farnborough Vocal School, under Anthea Dwyer. Over the years, she performed in many of their concerts, and joined Farnham Youth Choir aged thirteen. Through Farnham Youth Choir, Lottie won the Hart Young Singer’s intermediate prize, and gained many solo performance opportunities. FYC also travelled to Cincinnati to participate in the World Choir Games, gaining a gold and silver medal, and Montreux Choral Festival, winning both the audience and judge prizes. Lottie went on to study at the Junior Royal Academy of music, winning the intermediate category of their Singing Prize in 2016, and singing the role of Cherubino in their Opera Scenes in 2017. She is now a Vocal Scholar of the Royal Birmingham Conservatoire, under Anne Dawson. She has sung in two of their opera productions so far, and in March she sang the role of First Boy in their production of Mozart's The Magic Flute.

Miss Lottie Day – Guest Singer, January 18, 2019 Lottie came to give a recital here at Heathfield on January 18th 2019 as part of our Guest Performer Concert Series.She sang six songs, including “Under the Greenwood Tree” by Herbert Howells with great rhythmic understanding and “Take the heart you fondly Gave” by Handel with a beauitful legato line. I asked her to include some repertoire in a foreign language, so she also sang “Se mi rivolgo al Prato” in Italian where she was able to portray the meaning of the words with great sincerity and “An die Nachtigall” in German which was haunting. My students, all between the ages of 11 and 15 all thoroughly enjoyed the concert, especially as she introduced each item and told us why she liked each one as well as putting them into context for us. She was dressed in a beautiful evening dress which spoke volumes to our students about respect for her audience and overall, gave a thoroughly professional performance. She even stayed behind afterwards to talk to some of our singers which they all found thoroughly inspiring. Julie Dance March 2019

Charlotte (Lottie) Day is a fine young singer with a clear, bright soprano voice and very good diction. Her singing is expressive with well-shaped vocal lines. Charlotte is blessed with natural musicality and she is a good communicator. Reliable and well prepared, Charlotte is a rising singer to note. It is my pleasure to recommend her to your attention.