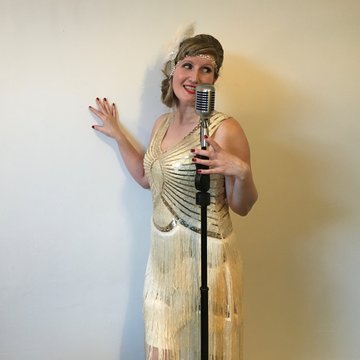 Poppy Holiday has been longing to perform on a stage since she was 4 years old. In her teens she sang in various bands in the Northwest Poppy currently goes out on the circuit as a full time professional singer/entertainer. Poppy Holiday can bring the roaring 1920's to you party or Event. Poppy wears her flapper dress and sings songs such as Charlston, Yes Sir That's My Baby, Anybody Seen My Gal? and many more.... Poppy Holiday also goes out as a 1940's tribute with Dave the Monkey making a guest appearance. Singing songs such as We'll Meet Again, In The Mood, Boogie Woogie Bugle Boy, and many more! Poppy loves dressing in her knee high boots to provide a 50's/60's set singing songs such as These Boots Are Made For Walking, Downtown, Let's Twist Again and many more of the popular songs from the 60's. Poppy can provide you with a normal set too but this can all be discussed prior to any event.

Poppy always tries her best to be flexible to help ensure your event runs as smoothly as possible. If timings change slightly in the run up to the event just let us know.

Poppy always will provide background music to your events taste before and in the breaks of my set.

I usually need 40 minutes to set up and go and get changed so I look my best for your event.

I can send my set list beforehand and you can choose the songs from may set that you prefer for your event.

Yes I will have everything I need to perform for your event.

Please message me about this, if its within my vocal range I will learn one song but if it does not suit my voice I will be sure to play it in between my set. If I do learn this song it will be an extra 30 pounds.

When I go out singing my 40's tribute sets I tend to balance my set to ensure theres enough dance type songs and sing a long songs. I also will play swing etc from the 40's in-between sets and I also have a little friend ( a puppet ) that comes to meet everyone, which if theres children they especially love meeting Dave The Monkey and so do the adults! When

Vera Lynn when performing my 40's tribute and Dusty Springfield for my 60's tribute.

I have sang for the company Adobe for there music video which was shown at a film festival on las Vagas. I also have stared in a film currently in post production as myself playing the singer.

We loved Poppy. We booked her to perform at our Swininging 60's event at Manchester Central Library to celebrate Older People Day. She was warm, engaging and professional. Poppy came to Central Library before the event to discuss the programme and do a soundcheck. She also arrived early on the day of the event. We had 120 pensioners attend the event and received wonderful feedback from all of them. They all enjoyed Poppy's performance and many were up and dancing for the whole event. At one point Poppy had the whole audience doing The Locomotion around the library! Highly recommended.

Poppy has performed twice for us at the Brig N Barrel, first on for a 40s night and secondly for a 60s night. The events were fantastically well received by our customers, and Poppy is not only an excellent singer, but a very affable and engaging entertainer. She knows her audience extremely well, despite traveling from out of town to perform for us and not previously being known in the area. Both her sets for the 40s and 60s were exactly what our customers (and us too) expected and all feedback we have received from our customers has been excellent on her performances, and the nights in general when she performs. We look forward to welcoming Poppy back at our venue in the near future. Owner - Brig n Barrel, Bamber Bridge, Preston

Poppy has sang at a bar I managed and I felt she would go down really well at my mum and dads wedding annivarsry at their home which is in a sheltered accommodation. Poppy had them all singing to the songs from the 40's/50's and 60's and also had them playing a couple of party games! Poppy also sang a slow song for my mum and dad to slow dance to which was a touching moment for us all. I would definitely recommend Poppy not only is she a great singer and entertainer she is also friendly and approachable and very professional. Ian Rogers - private party - Bar Manager

Poppy has performed at The Crown Hotel in Darwen for our Remembrance Day Charity Event two years running, her 40’s set list is outstanding not only from a musical but also from an entertainment point of view, she captivates and engages the audience and as result we asked her to a number of events for us. Zoe Evans- Landlady - Crown Hotel , Darwen

Poppy has performed for us on numerous occasions and has always been loved by the customers and they have always called for encores to which she has obliged. She has a lovely voice and never fails to please the audience. We always have her return to us. A lovely lady. Julie.K - Owner of Darwen brewery Taps.

Poppy performed on several occasions at Eachstep integrated care home, blackburn. She engaged well with the audience and was always very professional. A very popular singer who was always received well by the audiences. A joy to listen to and a pleasure to speak to. Beverley Shackleton- Activity & Community Engagement Co-ordinator

Poppy Holiday was invited to be the head line act At The Blind Tiger Rawtenstall, as part of the 2018 Rossendale 60’s weekend. Poppy delivered the songs perfectly and interprets the swinging 60’s brilliantly with her 60’s style and vocals, like be taken back in time. Owner Blind Tiger - Dawn Lousie price

I hired Poppy Hollday as our artist for a Ladies Evening at a Darwen Masonic Lodge, in Darwen , Lancashire in September 2018. I was principle lady for the event and as such was entrusted to organise the evening. Poppy arrived in plenty of time to get organised . She was extremely well dressed for the black tie event. She entertained us all very well, and her up beat set got even the most dance floor shy up dancing. I would highly recommend her for any occasion . Regards Gillian Campbell