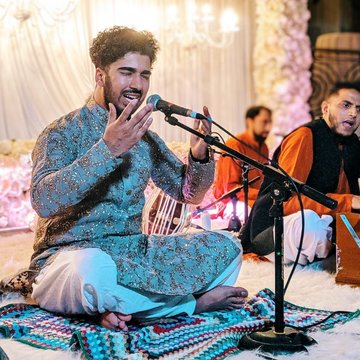 Chand Ali Khan Qawwal & Party are the leading UK-based international Qawwali and Bollywood group, primarily performing in the art of Qawwali, the devotional music of the Sufis. Extending the 700-year old genre of Qawwali, Chand Ali Khan Qawwal & Party are the leading lights of qawwali in Europe. The lead qawwal, Chand Ali Khan, is widely credited for his virtuoso talents in Qawwali and Naat to a range of international audiences, particularly in the UK. He performs the sacred art form with his mesmerising vocals that create a powerful resonance encompassing the most complex techniques of the 700-year old tradition. Chand Ali Khan has been rigorously trained under some of the legends of the music industry. Coupled with the disciplined training of the Party, this generates a fiery and compelling experience, as enjoyed by audiences around the world. Born in Pakistan, Chand Ali Khan had his first public performance at the age of 13 at his International School Sufi Day. Initiated and trained under the Ustad Nusrat Fateh Ali Khan Memorial Academy UK, he was appointed the Head of the Qawwali party with the permission of Haji Muhammad Iqbal Naqeebi (Secretary & Manager of the late Ustad Nusrat Fateh Ali Khan). Chand Ali Khan is also the ‘shagird’, or disciple, of world-renowned Ustad Iqbal Hassan Khan, influenced and impressed by the legendary and authentic style of raw qawwali as popularised by Ustad Nusrat Fateh Ali Khan and Ustad Rahat Fateh Ali Khan. Today, Chand Ali Khan is in high demand, performing across the UK & Europe, and engaging in collaborations with various artists across the world. He is strongly established as an artist in UK qawwali, and has received recognition from the qawwali circles including Ustad Rizwan Muazzam Ali Khan for his humble rapport.

As long as you have specified AM or PM for your time, we are able to be flexible. If it changes from morning to evening or vice-versa, there may be a clash with our schedule and you will need to reclarify with the team.

We can provide instrumental music from our sound engineer between our sets.

We usually set up about 1.5 to 2 hours before the performance time.

YES! Certainly, you may request tracks from our set list or more that may come to mind. Our list are a selection of the most popular that clients choose.

We bring our group members and instruments.

Our entourage have an array within their repertoire that they will perform depending on the audience interest and interaction.

Some of the largest in the UK, including on Trafalgar Square, Godiva Festival and the like.

ZA
Zishan A
2 months ago, for a Charity event in United Kingdom

I booked Chand Ali Khan Qawwal and Party for a Charity performance in July 2022, having never previously seen him perform live apart from YouTube videos. I can NOW say having seen Chand perform LIVE……WOW….he is definitely the finest Qawwal in the UK! He has an incredible stage presence and dazzling vocals - coupled with a ridiculous eye for detail! The man is a perfectionist, and you can see this when he is on stage performing with his group. All the guests were blown away by the mesmeric performance delivered by Chand on the night… Would 100% recommend Chand Ali Khan Qawwal and Party to others, and look forward to working with him at future events!

FH
Farzana H
2 months ago, for a Wedding in United Kingdom

Chand Ali Khan performed on my son's Walima. They were amazing,sounded fabulous and got a fantastic vibe going and really got everyone involved. Would definitely recommend to book. They really put the cherry on the cake to a fabulous evening.