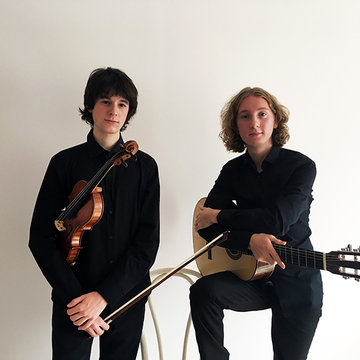 The duet was formed in January 2017 at the music school of Douglas Academy. Now studying at/auditioning for the RCS in Glasgow, specializing in the classical/romantic music of Italy and Spain. In march 2018 won first place at the string duets class of the Glasgow music festival and were invited as the only ensemble to play in the final night, out of 6 other performances competing for the grand prize (selected from 7000 contestants).

Yes, we perform as a duet however we can both perform as a soloist at any point during our set, using solo violin repertoire, solo guitar music (particularly nice for quieter background music moments) and as a duet as we most often perform.

We will always try our best to be accommodating to any changes in event timing, which usually are easily arrangeable with communication up to a few days before the event.

5 minutes for set up and tuning

Certainly, if asked in advance to prepare one or several requested songs/pieces.
Carroll-Martinez Duo

4.9 out of 5
2 verified reviews
Satisfaction

JB
Jane B
3 years ago

Carroll-Martinez Duo player at our wedding after we asked them to play last minute. They learnt 2 songs we wanted for the ceremony and played beautifully, a perfect addition to our day, thank you!

SP
Sarah P
3 years ago, for a Wedding in Ardgowan House

Lovely to meet such fine young musicians, Jacques and Marco who performed at Jane & Matthew’s wedding at Ardgowan House. They arrived promptly to setup and they played outside during the ceremony in the secret garden, it was beautiful.