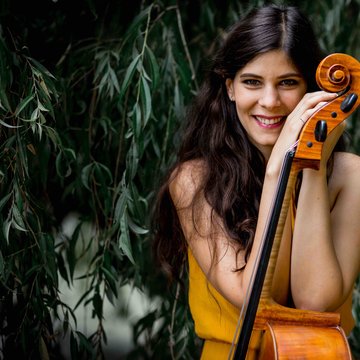 Carola studied at the University of Music and Arts in Vienna with Stefan Kropfitsch and in February 2010 she went on to study for a bachelor in music with Rudolf Leopold at the University of Music and Arts in Graz. After finishing her Bachelor she studied for a year in Paris as an exchange student at the Conservatoire CNSMDP with Marc Coppey. She returned to Graz to complete her master with Julian Arp in Graz. In autumn 2016 she started an Artist Diploma at the Royal College of Music in London with Alexander Chaushian. Carola has worked in Masterclasses with Georg Baich, Gustav Rivinius, Thomas Strahl, Xenia Jankovic, Wolfgang Herzer and many others. She has received several prizes as both a cello soloist and as a member of chamber music ensembles at the competition „Prima la Musica“ and "Austrian Masterclasses“ competitions. Carola participates regularly at festivals such as the Haydn - Tage (Austria), “Beet- hoven-Tage“ (Baden), “Kulturszene Kottingbrunn“, “Casalmaggiore International Music Festival,“ “Allegro Vivo Festival“, “Académie Internationale d ́ Eté de Nice“ , "Academy Maurice Ravel" and more. She also regularly participates in the chamber music series of highly talen- ted young musicians "Junge Musikfreunde Baden.“ In 2010 she gave her solo debut as a soloist with orchestra performing the Shostako- vitch Cello Concerto. In 2016 she played the Saint-Saens Cello concerto with orchestra at the casino Baden. Chamber music concerts in Austria, Bulgaria, Czech Republic, France, Germany, Hungary, Italy, Netherlands and Poland. Carola plays on a cello made by the famous violinmaker Urs Maechler. Starting 2017, Carola will be participating in the Southbank Sinfonia, one of the most internationally acclaimed orchestra academies. Upcoming Recitals in the Charlton House, St. James Picadilly Church and St. Martin-in-the-Fields, the Elgar Room of the Royal Albert Hall. Performance at the Great Exhibitionists 2017 in London. Invitation in June 2017 to Cyprus from DakApp. In July 2017, Carola will have her London solo debut, performing the Saint Säens cello Concerto with the South Bank Sinfonia, conducted by Simon Over. In Summer 2018 she performed the Brahms double Concerto with orchestra, conducted by Norbert Pfafflmeyer. 2019 she will perform the Beethoven Triple with a concert tour trough Austria and Russia. Carola is a RCM Award Holder supported by a Herbert Howells & Thomas Fielden Scholarship and the Henry Wood Accommodation Trust.

LW
Louise W
4 years ago, for a Wedding in Mayfair

Carola provided a fantastic performance at our weeding yesterday. She was professional, punctual and a pleasure to have around. Many thanks for making our day so special.

AB
Andrea B
4 years ago, for a Corporate event in Mayfair

Many thanks for your wonderful playing! Beautiful music, performed by an outstanding and gorgeous musician.