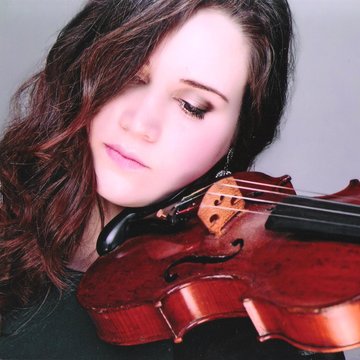 Versatile violinist based in London and the South East.
Violinist
London
Public liability insurance of £10 million

Cara Laskaris is a versatile and stylish violinist, acclaimed for her "virtuosic clarity" (The Telegraph). Cara performs regularly with groups including BBC Symphony Orchestra, Glyndebourne Opera and London Contemporary Orchestra, for concerts, tours, recording sessions & soundtracks including Hollywood films and chart topping singles. She is in demand as a chamber musician and plays with Artisti Con Brio and the Ardenti Quartet. As a solo violinist, Cara has performed concertos at St John’s Smith Square and Blenheim Palace, solos in a production at Royal Opera House and broadcasts on BBC radio. She has received masterclasses from Maxim Vengerov, Nicola Benedetti, Ivry Gitlis, Andras Keller and Rachel Podger. She gives recitals around Europe and the UK, including performing on the rare 'Beechback' Stradivarius violin which was broadcast on Austrian television. Cara is a member of Southbank Sinfonia, the UK’s busiest chamber orchestra, where she enjoys exploring a variety of genres, leading the orchestra in baroque, classical, contemporary and jazz performances. With Southbank Sinfonia, she has worked with conductors such as Vladimir Ashkenazy, Antonio Pappano and John Wilson, and played for performances with Aurora Orchestra, Academy of St Martin in the Fields, BBC Concert Orchestra, Guy Barker Jazz Orchestra & Orchestra of the Royal Opera House. Outreach work is very important to Cara. She has taken part in education and outreach projects with Wigmore Hall learning department, London Chamber Orchestra, Glyndebourne and Southbank Sinfonia, including performing and narrating family concerts and leading workshops. Cara studied on scholarships at Oxford University and Guildhall School of Music & Drama, and is very grateful for the support of the John Wates Foundation, the Vernon Ellis scholarship and the Ahmet Ertegun scholarship.

Cara, is a very able musician and made some intelligent decisions which aided the process of getting the job done successfully. She was a pleasure to work with. The end product sounds great....

Cara is an extraordinary talent. I thoroughly recommend her. She would be a great asset to your orchestra as a player and a person of great integrity.

Thank you so much for such a wonderful performance. I don’t know how to thank you!