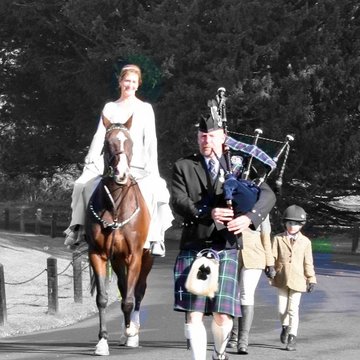 Check availability and get a free quote now - no commitment to book
From£180
Watch & Listen
About Cameron
Song list
Reviews
Home page
Cameron McMurchie
Like Cameron?
Watch & Listen
1-2 of 2 videos
19 August 2018
We Were Soldiers

Bagpiper with over 15 years experience available for weddings, funerals, Burns Night (full address to Haggis) or any other special event.
3 of 7 photos
Bagpiper
Waterlooville
Verified profile

Ex military and also ex emergency services, originally from a small town in the Highlands of Scotland called Crieff but now living in the South of England. I am a member of one of the largest pipe bands in the South of England and as part of the band and as a solo Piper I have played in Scotland, England, Wales, France, Belgium, Germany, Austria, Mexico and the USA.

Cam, Thank you so much for playing so beautifully at our wedding! It was an absolute pleasure to have you there and I only wish all occasions could be marked with Pipes! Our guests seemed genuinely thrilled to forego hymns and listen to you play instead. Think we might have to organise another big party and have you along to play again! Thanks again, from the new Mr and Mrs Tracey. X

It was so important for us to have a piper at our wedding and Cam did not disappoint! Nothing was too much trouble and he piped us into our ceremony and also entertained everyone afterwards with his kilt swishing and more music before piping us into our reception. Everyone loved him and even the 'English' guests at our very 'English/Scottish wedding got into the spirit of things. Cam also visited our venue beforehand to make sure he had enough headroom etc to move about and as a result he improved our ceremony entrance tenfold from what we thought would work. Just brilliant!