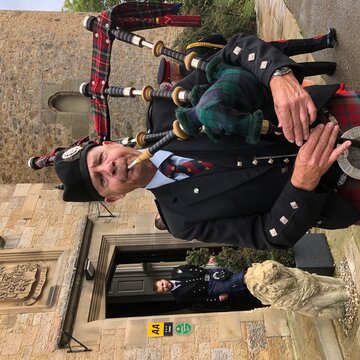 A World Champion bagpipe player available to play at all functions including weddings, funerals, corporate events, and others.
3 of 11 photos
Bagpiper
Leeds

Pipe Major Cameron Edgar is originally from Glasgow where he began his piping career in 1969 aged 13 and since then has achieved great success both as a solo piper and as a pipe band player. Throughout his competitive playing years he has won many solo piping competitions and is a former World Champion and Champion of Champions winner with the World famous Shotts and Dykehead Caledonia Pipe Band. He has also been, five times over, North West England Piping Society Champion – a record yet to be beaten. Some of his other notable achievements to date are Scottish Pipers Association Winner, Cowal Highland Gathering Winner, North East England Winner and Scottish Piping Society of London Winner. Cameron has played at functions all over the world and is a current member of the Royal Scottish Pipe Band Association Judges’ Panel judging at all the major competitions including the World Pipe Band Championships, Cameron has also judged extensively abroad. In addition to being a qualified adjudicator of solo piping and pipe band competitions he is also a qualified piping instructor through the Royal Scottish Pipe Band Association and the Piping and Drumming Qualifications Board as well as being an exam assessor. At present he plays a set of silver and ivory mounted Henderson bagpipes made around 1930. This is a very rare and highly sought-after instrument famous for its quality of tone. Cameron has performed at private events and functions for many years now and brings with him a wealth of experience that is essential to making sure that your special day goes without a hitch. As well as the Highland Bagpipe, he also plays Scottish Smallpipes and Uilleann (Irish) Pipes. He is available for all functions including Weddings, Corporate Events, Funerals, Burn’s nights, Birthday parties and New Year’s Eve parties throughout Yorkshire and the North of England as well as further afield and overseas.

He was fantastic everyone enjoyed him,and people who never heard pipes before thought he was amazing

Cameron was excellent from the minute we booked with him. Kept in contact, discussed our preferences and provided excellent renditions of our chosen pieces on the day. Would not hesitate to recommend Cameron to anyone.

Cameron was great, very professional and kept in touch with us to make sure he had all the correct details etc. Everyone really enjoyed listening on the day and it was a great surprise for my new husband on our wedding day. Thank you

We had Cameron for my 50th birthday party. What a wonderful piper. Such a lovely character, too. Made the evening magical. Played what we wanted. Created wonderful memories for my family and I. Thank you so much, Cameron 😊

Hi Cameron, Happy New Year and a belated big thank you for playing so wonderfully at our wedding in Ripley. Whilst I didn’t get to hear you play as much as I would have liked, due to bride duties, there have been so many people complimenting you in the letters we have received since the wedding. A New Year’s Eve we will never forget and many thanks for the part you played in that. Best wishes, Charlotte

Hi Cameron, I would just like to say a massive thank you for playing at John’s funeral on Saturday. The choice of music and your performance was just perfect. My husband would be so proud that we laid him to rest this way. Everyone, but especially all of his Scottish friends found the occasion extremely moving, and that is down to you, so many, many thanks.