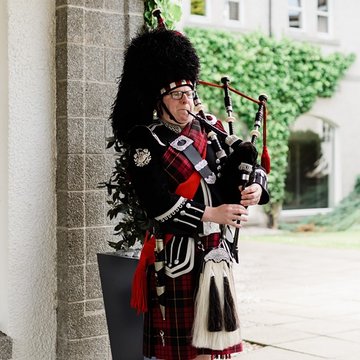 Experienced and award winning Piper based in Aberdeen in the North-East of Scotland. Available in full military attire.
3 of 7 photos
Bagpiper
Aberdeen
Public liability insurance of £10 million
Verified profile

Pipe Major Calum Lawrie started piping at a very young age, under the tutelage of Mike Maitland (Robert Gordon College CCF Pipe Band), before commencing private tuition with Pipe Major Alex Elrick (ex-Bucksburn & District) and piobaireachd lessons with renowned expert James Hamilton. Calum also attended numerous courses at the National Piping Centre in Glasgow. Alongside a successful stint with Bucksburn & District Pipe Band, Calum was also a founding member of the National Youth Pipe Band of Scotland (NYPB), with key performances including: • NYPB Live at Glasgow Royal Concert Hall (CD) • NYPB Launch Concert • Ortiguiera Festival with Carlos Nunez and the Chieftains • A sold-out concert (Attendance of 80,000) in Vigo alongside Bagad Breig (also shown on Live TV). Following this, Calum joined Grade 2 Buchan Pipe Band and enjoyed numerous victories, including at the Worlds, Europeans, British and Scottish Championships. In 2007, Calum helped to form the Ceilidh Peppers. The ceilidh / rock band successfully played at numerous public and private events across the North East before embarking on an even more successful international promotion to countries including Sweden, Ireland, Trinidad & Tobago and America. Celtic rock band Celtallica soon followed, with performances including The Wizard Festival (opening for names including Supergrass, The Buzzcocks, The Damned, Saw Doctors, Stranglers and The Charlatans). Through Encore, Calum has travelled to London to perform on multiple occasions at the renowned Burns Supper hosted at Plum & Spilt Milk (at Kings Cross) and supported Rod Stewart on his UK tour in 2019.

I'd like to think I'm a friendly chap, always happy to pose for photographs (official pics and selfies all welcomed!). I can also offer use of my highland office broadsword for cake-cutting photos and I'm an award-winning piper, so can guarantee a great performance for your special event!

Supporting Rod Stewart on his UK Tour in 2019, playing to a sold-out crowd.

We only ever take one booking per day, so if your timings change, no problem! We are always happy to be flexible.

I arrive 15-20 minutes prior to the start of the performance to tune my bagpipes ready to play.

Of course! I am always happy to take requests.

Yes, absolutely! Me and a set of pipes is usually all I need, but if you are booking me for a concert/outdoor gig I will need to discuss the PA/AV arrangements with you.

If I don't already know it, then I will add it to my repertoire just for you!

Standard Prices
All prices include:Consultation to select any special songs, full highland attire
NEW!Virtual services
Personalised Music Message
Book me to create a unique music video for you to send to a friend as a gift. This could be a birthday message, first dance song for a wedding anniversary, or just your friend's favourite song to cheer them up.
£15
Zoom bomb
I'll jump into your Zoom call and surprise your friends and colleagues with a unique song!
£50
Bespoke music video
I'll produce a unique music video with professional recording equipment. I can customise the video with a personal message and can accept tune requests.
£80

Calum played at our Mum's funeral, bringing dignity and beauty to the service. He is extremely helpful and goes out of his way to make sure he provides the service you want. His playing is faultless. I cannot recommend him highly enough.

An exceptional musician who made a special event extra-special! Highly, highly recommended.

He was professional, very accommodating, and play wonderfully to all of our requests as well as being a friendly face at the wedding. Couldn't recommend him enough!

We could not be happier with Calum's piping at our wedding. He was so helpful in the run up to the day and responded to our questions quickly. Would highly recommend Calum!

I would highly recommend Calum as a wedding piper. He piped at our recent wedding and was fantastic - he was very professional and communicative in the lead up to the wedding and everyone was very impressed with him on the day!

Calum piped at our recent wedding and we were delighted with him. All our guests enjoyed having him playing while they arrived at the venue. He was very professional and so helpful with any questions we had on the run up to the day. Would highly recommend!

I have worked with Calum on numerous occasions on corporate events and weddings and would not hesitate to recommend his piping services. He arrives on time if not early, interacts well with the guests and is really great to work with!

Just a wee note to thank you for being at our wedding – can’t believe we contemplated not having a Piper! It really made it “wedding-y” and being piped into dinner was so cool! Thanks again.

We had Calum as our piper for our recent wedding at Thainstone House Hotel and he was tremendous! So calm and helpful in the run up and on day played brilliantly, we were delighted, thank you Calum!

I would recommend Calum to anyone looking for a piper at their wedding. He is very easy to work with and very good at what he does. His outfit on the day is amazing and looks great in photos. He is a very friendly and was incredibly easy to work with during Covid-19 🙂

Calum is fantastic! He was able to do exactly what we wanted and he played all tunes superbly. This included playing for my niece to dance for us, which will always be one of the many magical moments from our day. Cheers Calum!

Whilst social distancing we are doing a weekly family quiz (as are the rest of the nation) and Calum piped in our weekly quiz this week! He was greatly received and cheered up everyone. Thank u!

Fantastic piper who played a important role in making our wedding day last weekend perfect. what a brilliant sport with our mad as hatters bridesmaids. we hope you survived the day. we love all the pictures. a huge thank you again

We had the pleasure of having Calum play the pipes at our wedding recently. It made the wedding feel more special having a piper during the ceremony. Calum was so easy to deal with and I couldn’t recommend either anymore. Thank you so much!

Absolutely brilliant piper, couldn’t have asked for more on our wedding day. So accommodating to whatever songs you want - even when I wasn’t sure on what I really wanted. One of my fave bits of the day, thank you x

Calum played at our wedding on Saturday and was amazing!! He went above and beyond the call of duty - even standing in the pouring rain holding an umbrella over our heads while we got photos taken! He was so friendly and helped put me at ease before piping me into my ceremony. I can't recommend him enough!

The sound of the Piper made my Scottish heart swell with pride combined with tears of joy. What a wonderful Piper and such a personable and pleasant young man. I would highly recommend him to anyone. Thank You again.