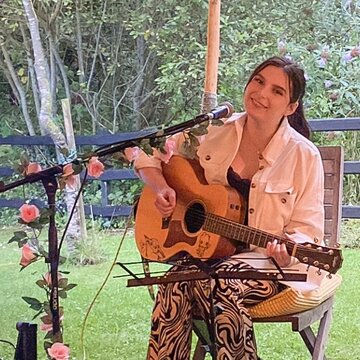 Queens University Music Student, based in Belfast, I sing pop/rock covers and originals. I can offer both a 1 piece and a 2 piece act.

I am a solo singer/songwriter from Northern Ireland, currently studying Music and Audio Production at Queens University Belfast. I play a mixture of upbeat pop/rock covers and original songs. My musical influences are Sigrid, The Wombats, Abba and The Beatles. I currently gig mainly in cathedral quarter Belfast, however travel all over northern Ireland and Ireland for performances. Some of the venues I have played in Include 'The thirsty Goat', "The Eglantine", "The Goats toe", and 'The Northern Whig" I have been involved in a variety of musical groups, from rock bands to traditional groups, and now my current band ‘The Boxcar Blues Brothers’. This has given me the opportunity to perform in various places including Custom House Square and The Limelight. I began writing my own songs when I was 14 years old, after teaching myself guitar from online resources. This lead to appearing on radio stations such as Blast 106, Belfast 89.fm, and Citybeat. Recently, I set up my own home recording studio, and am venturing out as a solo artist.

I always try to be as flexible as possible to help ensure your event runs as smoothly as possible. If timings change slightly in the run up to the event just let us know.

Absolutely. This is a really popular request and we actually offer this service for free. If you'd like a DJ service via our PA after the final set, we provide this for an additional charge depending on the time frame.

Depending on the size of venue, set up times can vary. However on average and set up will take about 20 mins. This can be straight before the performance starts; however for weddings and corporate events, I aim to have everything ready at least 1 hour before starting.

The set lists are crafted from countless performances and learning what works best to ensure guests dance and have an amazing time. However, I'm definitely happy to chat about suggestions to find out what will work best for your event.

Yes, absolutely! I have my own PA and monitor etc which is more than enough for most events; However if the venue is very large an additional PA system may have to be hired in which case an additional charge will need to be considered.

If a song isn't included in the song list there may still be a chance I already know it. If there is a special song you'd like me to learn I'm happy to do this for you. There is a fee of £5 for this service to take into account rehearsal times etc.

Standard Prices
All prices include:PA equiptment, music played through PA during any breaks - requests accepted, a Guitar and vocals set followed by a Ukulele and vocals set, Song suggestions are welcome (within reasonable time to the performance)

First time i heard caitlin sing. She has a beautiful voice and puts so much feeling in to her music. I hope she goes a long way. She deserves it.

Definitely a name to watch out for