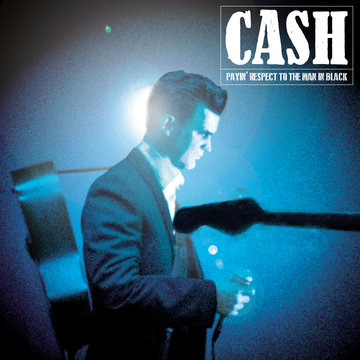 As is so often the case with unique artists, it takes another one to fully appreciate them. Having lived the life and music of Johnny Cash and other country heroes who came before and since, Ben Welburn, aka CASH, has effortlessly recreated the sound, vibe and appeal of the master himself. Growing up on a farm in the heart of Yorkshire, music has always been central to Ben’s life. With a Grandfather who was a big band drummer, and a Father with a vast musical collection enthusiastically shared with whoever would listen, music was everywhere. However, it was the music of a certain JR Cash that managed that rare feat of stopping a young and energetic Ben in his tracks. It gave him that first “light bulb” moment, as he recalls, “I had heard music before, of course. But this voice. His voice. I mean it literally brought me to a standstill. The words too. They just struck a chord with me somewhere and I really felt I understood what he was saying. I got this man, even as a child I could feel it”. As a youngster, this was the first time Ben had felt that deep connection with music and lyrics. Although Ben didn’t know it at the time, Johnny Cash would also come to be a very important figure in his life as an adult. Investigating the man further, Ben realised it wasn’t just Cash’s musicality that they had in common. The way Cash stood up prolifically for the working class, and wasn’t some clean cut musical ideal, only served to heighten Ben’s appreciation of the man. “JR has always been rough around the edges and I don’t know why but I always felt I was born with an outlaw’s approach to life. Not that I was out there robbing trains or anything, but it was more of a mentality; just something inside of me really”. Aided by many late nights and a plentiful supply of hard liquor, Ben would often sing Johnny Cash songs to his mates, strumming along on acoustic guitar. Being a drummer first, it took a bit of coaxing from family and friends before Ben decided to take the Cash alter-ego seriously. “I have always felt a bit weird about pretending to be anyone else other than myself, so the concept of being Johnny Cash didn’t really appeal”, says Ben. “People were continuously telling me I had to do something with all this Cash stuff, so I decided I would start taking it more seriously, but the word tribute was key. I would pay my respects to the man by getting his stuff out there again; reaching out to established and new fans, but in no way would I try to be him. That is just not doable in my eyes, so I don’t want people thinking I think I am him. Cos I don’t!”

Yes, we offer duo, trio, 4 piece and full 5 piece band set ups. Each set up can be a combination of any musician - always discussed prior.

No problem - just let us know as soon as you can.

Yes. Though please let us know prior to the event. It will be a playlist of country songs that blends with our set.

It depends on the set up (walking around whilst playing a stand up bass is difficult!), but we are open to discussion on how this would work if your event warrants this..

Our set lists are crafted from countless performances and learning what works best for each event. However, we're definitely happy to chat and make sure we find what works for your event.

Of course. The only thing we don't own or provide (in the quote) is a lighting rig.

If it is not in our set then yes we can learn it / put it in if it is a Johnny Cash song! Please allow at least 2 weeks prior to the event for this request.

Headlining an O2 academy tour every year for the past 9 years; A corporate show for Network Rail; Main stage at Glastonbudget; a sold out show in Lerwick (1300 people); 3 x sell out shows at Jazz Cafe, London...

Standard Prices
5 musicians
All prices include:PA equipment, PIL, consultation by phone. **Please note that our set length is 90 minutes (at maximum is 100 minutes). So the 2 and 3 hour performance duration would see our set length divided into segments that cover that time. For example - for a 2 hour performance - we are normally asked to play 2 x 45 minute sets with a 30 minute break.
CASH

4.9 out of 5
10 verified reviews
Satisfaction

Exactly what it said on the tin! Brilliant impersonator, stunning voice and captivating performance from start to end. Thank you also for being so punctual.

Cash were in two words ABSOLUTLEY GREAT the day was a great success Would recomend them to everyone. Thank you

As soon as a found The Cash band I knew they'd be perfect for the suprise I wanted to pull off for my Husband on our Wedding day! And WOW what a performance! It was incredible! They played a great set, guests were up dancing & laughing! Definitely a huge highlight of the day. I still have people telling me how amazing they were! And by the way guys, you have a new No1 fan - my Grandad! Thank you for being 100% awesome, from answering my emails, hiding in the hall for the suprise to putting on one hell of a performance! You guys did the Man in Black justice. We'll be seeing you again soon!

SH
Sandra H
3 years ago, for a Bar / Club / Venue event in Neasden

We had CASH play their debut gig at Greenes pub Neasden on St. Patricks Day 2019 and they went down a storm! Cannot highly recommend these boys enough, not only was their performance entertainingly brilliant from start to finish - they are true gentlemen and professional to the very end. Will be booking the band again!