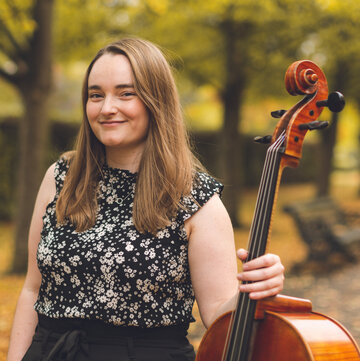 During my undergraduate studies at the RWCMD, I was fortunate enough to be given multiple opportunities, from solo playing to orchestral performances – most notable being the masterclasses I had with Paul Watkins and with Narek Hakhnazaryan in my final year. I led the RWCMD Symphony Orchestra multiple times in many different venues and led the section for ‘The Magic Flute’ at the Sherman Theatre which was an incredible experience. My love for musical theatre has also grown over the years, and I was cellist in RWCMD’s performances of ‘Company’ and ‘Sweeney Todd’. I also play for the musical theatre group ‘All That Cabaret’ and the ‘Technicolour’ choir, through which I have had some great concerts and events with over the last year. I have also participated in courses and orchestras outside of my studies, which has been important to me in terms of meeting great musicians and expanding my repertoire. These include the International Lutoslawski Youth Orchestra in 2016, the International Cello Academy in 2017, and the Young Musicians Symphony Orchestra. Most recently, I have performed with the Royal Academy of Music Symphony Orchestra, conducted by John Wilson, which was a fantastic project. I am also passionate about teaching and outreach, and currently work for Berkshire Maestros as a cello teacher, quartet coach and string orchestra conductor. I was lucky to have the opportunity to be a part of Wigmore Hall’s ‘Music for Thought’ program, working with people with dementia and their carers/family. This has been an incredible learning experience for me, and I am even more fascinated by this aspect of music and how its importance is crucial. I have grown into a very versatile musician, for which I would say my main passions are musical theatre, film music, orchestral playing, community/outreach work and performing in many different venues and set ups.

Yes, I have my own cello microphone and equipment, so just need a speaker or PA to plug in to.

'Absolutely fantastic show. What a way to start the Christmas festivities. You are all so talented.'

'Such a beautiful evening! Amazing performances which made us laugh as well as cry.'