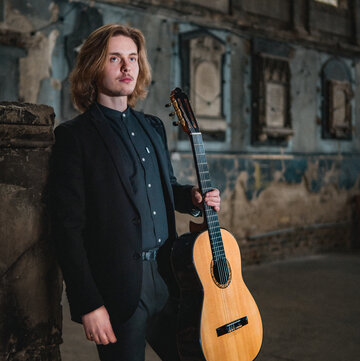 I am a Classical Guitarist based in South West London. I am currently studying for an Advanced Diploma at the Royal Academy of Music.

Described by Grammy award winning Classical Guitarist, David Russell, as a Guitarist of ‘outstanding talent’ - Bradley Johnson is an English Classical Guitarist based in London. Since beginning his musical career, Bradley has been drawn to music of the 20th and 21st centuries and is committed to its promotion. He is currently working towards premières as part of the Royal Academy of Music Bicentenary '200 Pieces' project by Gary Carpenter and David Gorton. His curiosity was ignited by exposure to Michael Tippett’s 'Sonata - ‘The Blue Guitar’, a performance of which secured First Prize in the Ivor Mairants Guitar Award - described in Classical Guitar Magazine as possessing ‘strongly formed musical ideas and the ability to deliver them with a natural sense of spontaneity’. Bradley began studying for a Masters Degree with Professor Michael Lewin at the Royal Academy of Music in 2017, from where he graduated with Distinction, DipRAM (for 'outstanding performance in a Final Recital') and First Prize in the Royal Classics Concerto Competition in 2019. He is now completing an Advanced Diploma at the Academy. During his studies, Bradley has expanded his repertoire from the 20th and 21st centuries through chamber music, with performances of Georg Friedrich Haas’s ‘Guitar Quartett’, Michael Tippett’s ‘Songs for Achilles’, Edward Cowie's 'Kandinsky' and Reginald Smith-Brindle’s rare Guitar Duos with Professor Steven Thachuk at the International Guitar Research Centre. Since 2018, he has been a Yeoman of the Worshipful Company of Musicians and has represented the company in concerts throughout the country. He holds a First Class Honours Degree from the Royal Northern College of Music, has received a Special Commendation from the Boise Foundation Scholarship Trust and his studies are supported twice by the Blyth Watson Charitable Trust Award, the Charlotte Fraser Award and CHK Charities Limited. Bradley plays Guitars by Philip Woodfield (2013) and Manuel Contreras (1987).

Standard Prices
All prices include:Original repertoire and flexibility with performance on the day.

Bradley is a talented musician with a large repertoire and the musicality to interpret what he plays very well. We could not have found any better performer for our needs (a golden wedding anniversary celebration).

his Tippett was distinguished by strongly formed musical ideas and the ability to deliver them with a natural sense of spontaneity...His performance, too, of the Mairants pieces was outstanding

‘Outstanding sense of rapport with the Piano...excellent musicality and near flawless technique.