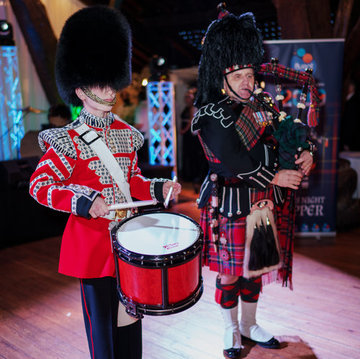 We are a father & son piper & drummer, who pride ourselves on providing a smart, reliable unique service. We have both been honoured to have previously been invited to perform with the 1st Bn Scots Guards Pipes & Drums at various high profile prestigious events including: - Playing for HM Queen during Royal Week in Edinburgh, when the Scots Guards were mounting the Royal Guard (2019) - Playing at the Royal Edinburgh Military Tattoo (2008 & 2018) - Playing on Jools Holland's Hootenanny Show (2018 & 2019) - Playing on the Household Division Beating Retreat (2016) We both pride ourselves on our immaculate presentation, and always conduct ourselves with military discipline and bearing, ensuring that every event is given the same diligent attention to detail Having performed with such an esteemed Regiment in front of HM Queen, you can be assured that we will not disappoint at your event - bearing in mind that my son was still only 14yrs old when he played in front of HM Queen, and a year younger when he performed every night at the Royal Edinburgh Military Tattoo, just demonstrates his sheer professionalism and maturity As a serving army reservist myself, with my son also being a Royal Marine cadet, we feel that we can offer a more military disciplined service to any corporate or private event, regardless of grandeur Being members of the Scots Guards Association Pipes & Drums, we feel that we are always representing the Regiment when performing in public, so conduct ourselves accordingly, and always turn out in Scots Guards full dress uniform Our previous clients tend to agree that our unique presentation brings far more gravitas to any event - as opposed to the usual piper turning up wearing day wear (jacket and waistcoat) - plus, we can usually provide 2 musicians for the price of 1!!! (school days permitting of course) I've been piping for 36 years now and my son has been pipe band drumming for 6yrs, although he's played a drum kit for 9yrs At 15yrs old, he's reached the top level Grade 8 in kit drumming, and also achieved a 4th place, in his category, at the World Solo Drumming Championships on the pipe band snare drum.

Judging by feedback, our clients tend to appreciate that our presentation is always immaculate, with military discipline and bearing, and that we always perform in Scots Guards full dress uniform. They also like the fact that we are a father and son team, who thoroughly enjoy performing together - plus you usually get 2 musicians for the price of 1!!!

We aim to arrive at least an hour before an event, to allow for a final tuneup and to get changed into uniform, if travelling a distance - obviously, just in case you have booked us as a complete surprise for the event, we will always be discreet and remain unseen to guests beforehand

We are always happy to advise on tune selection for an event or, if you have specific tunes already in mind, will endeavour to learn them, time permitting, if not already within our repertoire (please note though that the bagpipe scale is somewhat limited, so we can't always promise to play certain 'non-traditional' tunes if they won't transpose melodically)

Yes, we are entirely self-sufficient!

We will endeavour to learn any specific tunes, time permitting, if not already within our repertoire (please note though that the bagpipe scale is somewhat limited, so we can't always promise to play certain 'non-traditional' tunes if they won't transpose melodically)

Dave & Keiran, I cannot thank you both enough! What you did on Friday will be echoed in our family forever. The entire family are eternally greatful. Lynn, Tony & Chloe have asked me once again to thank you from the bottom of their hearts so “Thank You!”. You are both extremely professional musicians with crisp military bearing throughout! Your attire was exemplary! Our communication throughout the run up to the event was excellent and swift, and you are both very genuine and lovely people and are a credit to one another. Dave you have raised a wonderful Son in Kieran, and Kieran you have a fantastic Father! Your performance was mind blowing, everybody can’t stop talking about it and it was an absolute honour to have you playing at Ewan’s funeral, and by heck did you both do him proud!!!! Without a doubt I will definitely be back in touch for future hire purposes and to all those out there who are searching this site, Bonnet & Bearskin are absolutely superb and you will not be disappointed, truly remarkable and cannot recommend highly enough!!!! Snap them up immediately you will be blown away you really will. Thank you both for everything, I wish you all the very best for the future. Best regards and much gratitude always, Lynn, Tony, Chloe and myself George. A special thank you from all of the family and friends in Stoke & Scotland too! xxxxx

JB
Janice B
1 year ago

Fabulous,has soon has the car arrived he started playing so just 👌 Went over to speak to the guy and very nice pleasant and chatty,Thankyou again x

SR
Sir M
3 years ago, for a Corporate event in Canal Wharf

Dave, Just a quick note to say you did a fantastic job at yesterday's ceremony, and I have received a lot of compliments from guests praising your performance. Everyone raving about the event and you made it a great day. I will certainly be in touch in the future, and attached are a couple of snaps for you. Kind Regards, John Harvey Senior Office Manager, Sir Robert McAlpine Ltd

SP
Stephen P
3 years ago, for a Funeral / Memorial service in Ring Rd

David, Mum has asked that I pass on the following in relation to your contribution to my Dads funeral: ' I am very sorry I did not get to see you to say a very big THANK YOU for the music that you played at my husbands funeral on the 5th September at Cottingley Crematorium. I did see you walk slowly away playing as you left - thank you for that it was a lovely way to finish. Since the service people have contacted me to say how spectacular you looked and the pipes and music excelled anything we could have imagined. Thank you so very much for helping us to achieve my husbands wishes. I regret not having spoken to you on the day, please accept my apologies - I was in a world of my own. Regards Carole Pottage.'