Betsa and The Bueno Boys 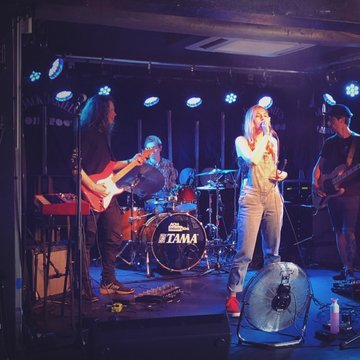 About Betsa and The Bueno Boys

We are a young energetic indie pop band with a set list packed with only the finest pop and rock covers. It's simple, we make people dance!

Betsa and the band have performed in and around London, playing at venues such as; The Bedford, Boileroom, Pizza Express, Jamie's Italian, Weyfest, Farnham Gin Festival, Farnham Food Festival, Party in The Park - Surrey, The Electric Theatre, Yvonne Arnaud Theatre, and Tobacco Dock for BBC Introducing Live. They now specialise in keeping party-goers dancing throughout the night with their cover sets at functions and private events. The band have 45 minutes worth of original material, perfect for festivals, clubs and support slots. They also perform 2 x 1 Hour Sets of well known, upbeat covers, suitable for functions, parties and festivals. The Band have been recognised by BBC Music Introducing and chosen as act of the month 5 times and have appeared in the BBC Music Live Lounge twice already. The Band have a PA and sound technician who makes the live mixes sound like studio recordings. There's no distortion and your ears won't ring as he's also very hot on health and safety. "Bottom line is that we love music and love playing live. We have fun on stage, we smile because we want to."

The band line-up seen in the video will be the band you get when you book. The Singer will always be Betsa.

We can make alterations for smaller set-ups as well as acoustic set-ups, having a cajon instead of a full drum kit.

We will try and be as flexible as we can. If timings do change make sure to let the band know as soon as possible.

Of course! We have provided iPod/DJ services before and between sets on many occasions, making sure the playlist is filled with songs that the booker loves. If you would like a DJ/iPod service via our PA after the final set until the venue closes, we provide this for an additional £100.

We usually set up about 45minutes before the performance time. As soon as our PA is set up we can provide a free playlist service to help set the atmosphere and get your guests ready for our live performance!

Our PA system is included in the price and run by our fabulous sound engineer. He can also provide lighting if requested. Let us know what you would like and we can make it happen.

All prices include:PA System and Professional Sound Engineer to Ensure Great Sound Quality Throughout The Evening

Betsa and the rest of the band were fantastic, extremely easy to communicate with and excellent on the night. Definitely recommended!

The band were fabulous, the music was fabulous, the sound system was fabulous. Betsa and The Bueno's were flawless and created the perfect party atmosphere for our anniversary. They had the right mix of oldies but goldies and new chart toppers. We will be booking them again!

The band headlined the Farnham Gin Festival. They brought fantastic energy to the great hall and performed well known covers, along side their own brilliant original material. The musicianship between band members was fantastic, along side a beautiful vocal performance from the main singer. We have since booked the band for 3 additional Farnham events and they always bring their A-Game. Very Professional.

I have had the pleasure of booking Betsa and her band on two occasions in the last year and recommended her to others who have booked at events I have been to. I meet Betsa and the band at one of her many charity/local community functions in Farnham, her mixture of music, quality, ability to interact with the audience and captivating performances left me in no doubt she was right for our party. Betsa and the band performed at a private woodlands party we organised for friends and family. She was the top act on the night getting everyone on their feet and I know from that evening other guests went on to book for other events. Betsa also performed at the Farnham Motoring Festival in 2018, playing to guests on a very hot summer afternoon, again an excellent afternoon of music and fun. I have no hesitation in highly recommending her to anyone who is looking for a great singer and band.