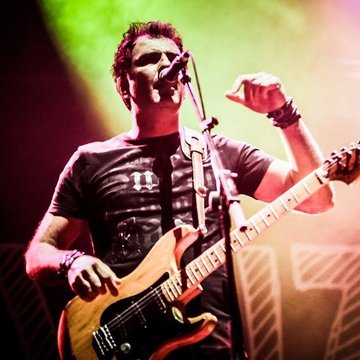 I embarked on my musical career in 1992 by joining a band created by the drummer of the legendary Turkish rock group Mogollar. After giving over a hundred performances in Turkey, I formed my own band and played for some years in leading performance halls in Istanbul. During this time I also performed as a session musician for the the albums of several popular Turkish artists, including vocals for ‘Bulutsuzluk Ozlemi’, guitar and vocals for Nazan Oncel, vocals for Mogollar and many more. In 2006 I released my first album through the production company TMC Records. 3 music videos were shot for this album (Ben Hic Sevemem, Kaygi and Yagmur) , all of which topped the charts in Turkey for a lengthy period of time. Following the success of my first record, I collaborated with artist Nilgul and released a duet ‘Yandim, Yandim, Yandim’ which was wildly popular and stayed at #1 for several weeks. I released my second record ‘Geldim, Gördüm, Sevdim' in 2011 through Irem Records followed by and instrumental album for children 'Korel'in Ruyasi’ in 2013. Another single ‘Yol Uzun’ was released in 2014, followed by my latest record ‘Issız’ in 2015. In 2016 I was invited to perform as frontman (vocalist/ guitarist) for yet another legendary Turkish rock group Kurtalan Ekspres. This band is known internationally as the band of Baris Manço, who was the original frontman for this group. Baris Manço sadly passed away in 1999, but the band lives on. We performed over a hundred concerts over a year, after which I moved to London. I have now formed a band in London, and we are playing across London and establishing ourselves here. With ideas and lots of songs already recorded at home on my system, 1 generic music for a show in TRT TV (Turkey) and couple of jingles, i am ready and willing to widen my experience here in UK.

Verified
Bulent A, 2 years ago

“I’ve had the absolute pleasure of calling upon Bertug’s services for my projects on several occasions and is by far one of the best professional musicians I’ve ever worked with. His sheer passion, energy, attention to detail & professionalism of Bertug makes him a driving force in his trade. He’s also a gentleman on and off stage, always punctual, excellent communication skills and always goes above and beyond. Bertug’s commitment and total pride to music services is beyond comprehension”

Dear Bertug, I would like to thank you so much for making our bar Hacon special on Saturdays when you were performing, singing & playing large range of songs including your own. We were really enjoying , I would recommend you all my friends and colleagues. Thanks again for everything Regards Ozgur Yagli Hacon Bar Director