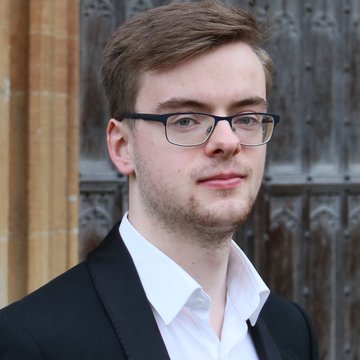 Ben began singing in Nottingham aged 8 with the Nottingham Boys’ Choir. While still a treble Ben was an auditioned member of the Diamond Choir, which performed the anthem at The Queen’s Diamond Jubilee Service at St Paul’s Cathedral in 2012. Ben joined St Peter’s Choir in 2012 and has performed solos in works such as Handel’s Messiah and Bach’s Lutheran Mass in F. More recently, Ben performed Vaughan Williams’ Five Mystical Songs with the choir as part of their tour to Riga, Latvia in August of 2019. From 2016-2018, Ben was also an Auxiliary Lay Clerk at Southwell Minster, singing occasional services with the professional choir. Ben won the singing prize at the 2017 Nottingham Young Musician of the Year Competition, as well as first prizes in several classes in the Leicester Music Fest. Ben is currently a second year Academical Clerk at Magdalen College, where he studies History. As well as singing six services a week with the renowned choir of boys and men, Ben studies singing with Carys Lane, and has previously participated in masterclasses with Marcus Farnsworth, James Newby and Roderick Williams. Ben is also grateful to have received occasional lessons from Gillian Humphreys OBE in London, through the Concordia Foundation scheme to provide performance opportunities to young musicians. Over the past year with Magdalen, Ben has performed in various concerts both in the UK and abroad, including Paris and the Antwerp AMUZ. Most recently, Ben performed with the choir in a concert conducted by John Rutter broadcast on Classic FM in December 2019. Ben is also excited to be featured on Magdalen’s next recording, to be released in 2020. Ben is an alumnus of the Eton Choral Courses, and worked with directors such as Stephen Cleobury, Andrew Nethsingha, Paul Spicer, and Ben Parry. Ben is also a current member of the Rodolfus Choir, conducted by Ralph Allwood, with whom he has just recorded a disc of works by John Taverner and Francis Grier and performed at the Three Choirs Festival in Gloucester. Ben was also part of the Stile Antico Youth Consort in August 2019, and has deputised for ensembles around Oxford, such as Fount and Origin and Ensemble Nova. Outside of singing, Ben is a keen follower of Nottingham Forest FC and Nottinghamshire County Cricket Club.

I have a fairly flexible schedule, and so can adapt to a change of timings prior to an engagement. Suitable notice (ideally at least one day before the event) would be much appreciated.

If hired for a recital, I prefer to select a programme I feel would be appropriate myself, though I am open to suggestions from event organisers for more personal engagements such as weddings.

I can perform requested pieces if notified in advance. This is certainly possible for weddings, for example, and I have experience of singing requested items for wedding processions or receptions.

Standard Prices
Packages
Church Services
This is for providing liturgical music where required, for a service lasting around 45 minutes. Booked either as a solo Cantor or as a dep.
£50
Concert Fee
Fee for a concert lasting c. 90 minutes, when hired as a soloist.
£120
Wedding ceremony
This includes music before the service begins, music during the signing of the register, and music as guests leave.
£200