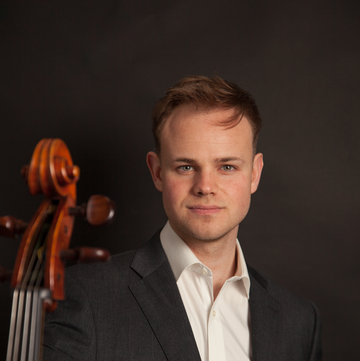 Ben will make his Concerto Debut in The Barbican Hall, performing Elgar’s Cello Concerto as one of the three Guildhall Gold Medal Finalists. Recent highlights include a shared Award-winners’ Recital at Wigmore Hall through The Concordia Foundation and Worshipful Company of Musicians, recitals at St James’s Piccadilly Church and St Martin-in-the-Fields, a performance of Brahms’s Double Concerto at St John’s Smith Square and the UK Premier of Anders Hillborg’s work ‘Duo’ for Cello and Piano in a BBC ‘Total Immersion’ Concert in Milton Court Concert Hall which The Guardian commented ‘here…Ben Tarlton and Ben Smith did wonders with it, playing with extraordinary precision and insight.’ Born in 1995 in Wales, Ben studied with Sharon McKinley and Alexander Baillie before attending the Yehudi Menuhin School in 2011 to study with Thomas Carroll. In 2014, he received a Scholarship to The Guildhall School of Music and Drama to study with Louise Hopkins, continuing his studies as a Postgraduate Student in 2018, kindly supported by The Guildhall School of Music and Drama, Help Musicians UK and The Countess of Munster Trust. He was recently awarded the 2019 Suggia Gift by Help Musicians UK, The David Goldman Award from The Worshipful Company of Musicians and was the recipient of the 2019 John Fussell Award. Ben is a Concordia Foundation Artist and a Park Lane Group Artist; regularly performing for both organisations in major London venues. In 2016, Ben was selected as a Fellow to participate in the Piatigorsky Cello Festival in Los Angeles. In November that year, he performed Schumann’s Cello Concerto with The Guildhall Symphony Orchestra for The LSO’s Donatella Flick Conducting Competition Semi-Finalists. Ben participated in the masterclasses at IMS Prussia Cove in 2017 and has frequently attended The Open Chamber Music Seminar since. Also in 2017, he performed as a soloist in a gala concert at Zurich’s Hochschule Der Künste with The Youth Classics Orchestra. Ben has performed in venues and Festivals such as Cadogan Hall, Wigmore Hall, St Martin-in-the-Fields, St John’s Smith Square, St James’s Piccadilly Church, West Road Concert Hall in Cambridge, Wales Millennium Centre, Cowbridge Music Festival, Casa da Musica in Porto, the Tonhalle in Zurich, the Muziekegebouw in Amsterdam and the Walt Disney Concert Hall in Los Angeles. He has played in masterclasses for Frans Helmerson, Ralph Kirshbaum, Colin Carr, Raphael Wallfisch, Heinrich Schiff and has had chamber music coaching with Andras Keller, Rita Wagner, Ralf Gothoni, The Takacs Quartet, The Brentano Quartet, The Gould Piano Trio and The Endellion Quartet. Ben is Artistic Director of The Llantwit Major Chamber Music Festival and has recently started teaching at The Royal Welsh College of Music and Drama. He regularly performs Chamber Music Concerts across Wales for Sinfonia Cymru.

Wonderful choice of repertoire for the drinks reception, perfect for the occassion