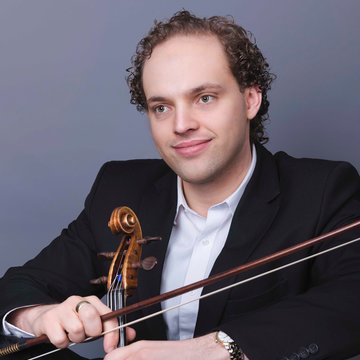 Check availability and get a free quote now - no commitment to book
From£180
Watch & Listen
About Ben
Reviews
Home page
Ben Knowles
Like Ben?
Watch & Listen
1 of 1 video
Audition Video

A recent graduate from Trinity Laban Conservatoire of Music and Drama, Ben Knowles gained a MusB(Hons) degree in Music from The University of Manchester in 2011 and subsequently gained a PGDip on the viola from Trinity Laban Conservatoire, passing with merit. Prior to university, he studied at the Kent Music Academy, where he begun studying conducting, piano and violin/viola. He regularly participates in conducting classes, such as Sherborne Summer School of Music Conducting Course and the RNCM conducting days and weekend. For three years, he studied at Denise Ham’s Blackheath Conservatoire Conducting course. In 2011, after 4 years as a violinist in the Kent County Youth Orchestra, the last year being spent as co-principal, Ben was offered the post of principal viola of the orchestra, a role that he held during his final year with the orchestra. In August 2016, Ben founded the London Beethoven Orchestra with the intention of performing a cycle of the complete concerti and symphonies of Beethoven. Over 9 months (October 2016 to June 2017), featuring world-class soloists (Harriet Mackenzie, violin; Thomas Carroll, cello; Anthony Hewitt, piano; Emily Wenman, soprano; Emma Curtis, alto; Mark Milhofer, tenor; Alan Fairs, baritone), the London Beethoven Orchestra, comprised of orchestral musicians from across the London Conservatoires and Universities, they put on a series of concerts in which they performed Beethoven’s complete concerti (including the lesser-played Piano Concerto after the violin concerto and the Choral Fantasy, along with favourites such as the Violin Concerto, the 5 Piano Concertos and the great Triple Concerto) and all 9 symphonies plus Barry Cooper’s completion of the 10th Symphony. In addition to these works were many of his overtures and the two Romances for Violin. Ben played viola in the University of Manchester Symphony Orchestra, often as principal or co-principal and in 2011, finished his association with them on a tour of Germany and the Czech Republic. He regularly plays with string quartets and enjoys playing a varied quartet repertoire. Ben played violin in the Kent County Youth Orchestra, as co-principal, until Autumn 2011 when he was appointed principal viola. An exponent of New Music, Ben regularly performed with Vaganza, the University of Manchester’s New Music Ensemble, playing in a concert for the Music Society’s Patron, Sir Peter Maxwell-Davis, along with several other new works by some of the country’s top contemporary composers. In 2009, Ben was appointed one of the student conductors of the University of Manchester ensembles. He has participated in conducting masterclasses with Richard Bonynge, Philippe Bach and Tim Reynish and undertook two intensive summer conducting courses with Peter Stark. He began studying under Kenneth Woods and the RCM Professor of Conducting, Peter Stark in September 2010. In June 2011, he had the privilege of conducting the world-premiere of three pieces written by University of Manchester composers Kevin Malone, Richard Whalley and Phillip Grange in honour of the distinguished musicologist Professor David Fallows that were performed on a day celebrating his achievements prior to his retirement. The end of 2014 and the beginning of 2015 saw Ben continue his conducting development under Kenneth Woods when he was invited to work as Conducting Assistant on the first two performances of a new work by Deborah Pritchard based on the paintings of Maggi Hambling. The performances took place at LSO St. Luke’s and the National Gallery, London. The first of these performances was released on CD by Nimbus Records. He also worked as Assistant Conductor with the ESO for the world premiere of John Joubert’s opera Jane Eyre, with soloists including April Fredrick, David Stout, Mark Milhofer and Alan Fairs, which was recorded by Somm Records and released in March 2017. Ben has performed in the Edinburgh Fringe Festival and across Europe, playing in some of the top concert halls in Italy, Belgium, Czech Republic, Bulgaria and Germany, as well as playing in a sold out performance of Britten’s War Requiem with the University of Manchester Symphony Orchestra at the Bridgewater Hall, Manchester in 2009. Most recently, Ben has been offered professional engagements with the London-based Orpheus Sinfonia, performing under conductor Thomas Carroll and with soloists including the violinist Tamsin Waley-Cohen and guitarist Xuefei Yang. Also a pianist, Ben reached the final of the Maidstone Young Musician of the Year in 2007 and now does regular accompaniment work, both in recitals and in pit-bands. He works frequently with singers and often accompanies grade exams. Working in pit bands led him to be the Assistant Musical Director for a production of Tim Rice’s rock-opera Chess. For this, he re-orchestrated the music for an 11-piece pit-orchestra, wrote an overture and curtain-music based on themes from the show and conducted a sell-out run of 7 shows. He was later appointed the Musical Director for a youth theatre production of Les Miserables School Edition in West Sussex and conducted four shows to a combined 1000 people with a full-size pit band in July 2016. The show was a huge success and was watched by the Resident Director of the West End production of Les Miserables. His next work in musical theatre was as Musical Director of a production of Singing in the Rain in June 2017. Ben is also active as a piano and violin teacher in North Kent. As a piano teacher, Ben is a keen exponent of the Leschetkitsky Technique and and a violin/viola teacher, specialises in the teaching of Mazas, Schradieck, Kreutzer, Sevcik, Rode and Dont, as well as the lesser known Pal Lukas and Harold Berkley studies. Ben studied viola with Richard Crabtree, Professor of Viola at Trinity Laban Conservatoire of Music and Dance and plays on a fine David Milward viola made in 2015.