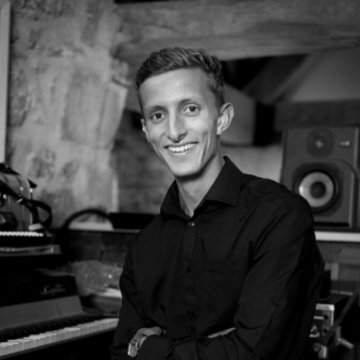 Ben is an active Jazz pianist and session musician. Ben started musical life as a chorister at Exeter Cathedral (2001-2005). More recently, Ben graduated from the Royal Welsh College of Music and Drama with an MA in Jazz Piano in 2015 (Merit). Whilst at college Ben studied harmony and composition under respected Jazz artists such as Huw Warren, Iain Ballamy, Nick Weldon, Dave Cliff and Steve Waterman. This has also included performance masterclasses with artists such as Gilad Hekselman Jacqui Dankworth, Empirical, Tim Garland, Stan Sulzmann, Polar Bear, Kit Downes and John Turville. Prior to college, Ben was a member of Devon Youth Jazz Orchestra (2005-2010) and played at Montreux Jazz Festival, Switzerland in July 2010. During his time with DYJO Ben was able to attend workshops with artists such as Mark Lockheart, Mark Nightingale, Dave O’Higgins, Bruce Adams, Clark Tracey, John Etheridge and Greg Abate. Ben was also invited to attend regional masterclasses with the National Youth Jazz Collective (NYJC), whose tutors included Mark Donlon and Liam Noble. In 2010 Ben attended the Tim Richards Jazz Piano summer school in London, and studied with Nikki Yeoh and Terry Seabrook. Ben has also studied with Craig Milverton (Voted Jazz Pianist of the Year 2010 at the British Jazz Awards). Ben was awarded bursaries to attend the Jazz course with Keith Tippett at Dartington International Summer School from 2005 - 2008.

I play a mix of Jazz standards and tunes from the Great American Songbook. I also regularly play classical as well as modern pop covers on request.
Aint Misbehavin
Aint No Sunshine
Alice In Wonderland
All The Things You Are
All Of Me
As Time Goes By
Autumn Leaves
Berkley Square
Beyond The Sea
Blue Train
Blue Moon
Billie’s Bounce
Blue Monk
Body And Soul
Bouncin’ With Bud
Cry Me A River
Come Fly With Me
Detour Ahead
Devil May Care
Dolphin Dance
Dream A Little Dream
Embraceable You
Every Time We Say Goodbye
Fly Me To The Moon
Footprints
Fever
Four On Six
Freddie Freeloader
Georgia
Get Happy
Girl From Ipanema
Green Dolphin Street
Harlem Nocturne
Have You Met Miss Jones
I Loves You Porgy
I Get A Kick Out Of You
I Got Rhythm
I Only Have Eyes For You
It Don’t Mean A Thing
I’ve Got The World On A String
I Hadn’t Anyone Till You
I’ve Got A Crush On You
I’ve Got You Under My Skin
I’ve Never Been In Love Before
I Could Write A Book
It Had To Be You
In A Sentimental Mood
Jordu
Let There Be Love
Let’s Call The Whole Thing Off
Let’s Fall In Love
Lonnie’s Lament
Love For Sale
Lullaby Of Birdland
Misty
My Funny Valentine
My One And Only Love
Makin Whoopee
Moanin’
My Favourite Things
Naima
Night And Day
The Nearness Of You
On The Sunny Side Of The Street
One By One
Our Love Is Here To Stay
Pure Imagination
Round Midnight
Satin Doll
Someday My Prince Will Come
Summertime
So What?
Stardust
Smile
Skylark
Somewhere Over The Rainbow
The Song Is You
The Nearness Of You
The Lady Is A Tramp
Take Five
Take The A Train
The Glory Of Love
The Days Of Wine And Roses
The Way You Look Tonight
They Cant Take That Away From Me
There Will Never Be Another You
What A Difference A Day Made
What A Wonderful World
What Is This Thing Called Love?
When I Fall In Love
When You Wish Upon A Star
Wave
Well You Needn’t
Watermelon Man
You Make Me Feel So Young
Customer questions

Usually tunes are called on the day between the musicians as per the Jazz tradition and the set list is a rough guide of our favourites. However, we're definitely happy to chat through and make sure we find what works for your event. We can do new request for a small fee - please see below

If there is a special song you'd like us to learn we are happy to do this for you. There is a fee of £30 for this service to take into account rehearsal times etc.

4.6 out of 5
4 verified reviews
Satisfaction

We hired Ben for our wedding and we're very glad we did! He's a fantastic pianist, we would recommend him to anyone and everyone.

Ben played at our Christmas/Birthday party, what a lovely guy and he was absolutely brilliant! He played some wonderful pieces and all the guests thoroughly enjoyed his performance! He was super attentive and accommodating, and even made my 9 year old daughter his biggest fan! I cannot recommend him highly enough, from beginning to end his service was faultless. 5 stars all the way!

Very happy on the whole - Ben got in contact in good time to confirm arrangements. He was punctual and professional on arrival and well turned out for the event. He set up quickly and was able to meet the needs of the dinner night very effectively. Perfect background music to the event and he was very flexible when we needed!

We were very happy with Ben. He is a good musician, knows a great many tunes and was very polite and accommodating.

Ben played at our wedding (Sept 2015) and created the perfect atmosphere and ambience. All guests commented that it made the day even more beautiful. He comes highly recommended!

Ben set the perfect atmosphere at our wedding reception and brought that extra level of class to our special day - a lot of guests asked where we found him! Personable and easy to deal with - we highly recommend.