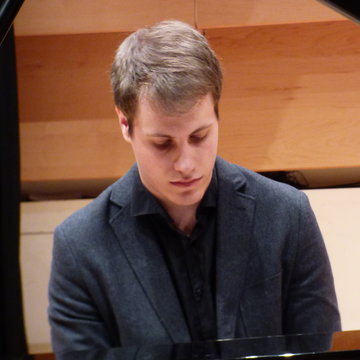 Ben Cockburn is a Classical pianist, accompanist and teacher based in the United Kingdom. He graduated in Classical Music from Leeds College of Music in 2016 with a BA Honours. Ben is also member of Clarinet and Piano duo Reed & Ivory, The Kokopelli Trio and has been a member of Leeds College of Music’s Camerata Orchestra, New Music Collective, Part-song choir, symphonic wind orchestra and Chamber Orchestra. Ben grew up in Carlisle, England. He didn’t start studying the Piano until the age of 16 where he was taken under the direction of Piano teacher Nick Rimmer. He achieved a grade 8 merit in Piano within 2 years with the London College of Music examination board and won 3 awards for attaining the highest grades in his county. He often credits his Grandmother as being the biggest influence in his choice to pursue music, and the time he spent listening to her play when he was younger. While at Leeds College of music Ben studied under the direction of internationally renowned pianist Jakob Fichert, while also working there as an events steward and Student ambassador. He has participated in several concerts and events around Yorkshire including at the Leeds City Art Gallery, Holy trinity church, Wakefield Cathedral and White Cloth Gallery. Ben achieved the bronze award in 2014 at the East Coast Musician of the year and was invited back as the principal Piano student in a masterclass with Richard Utley. Ben has also taken part in masterclasses hosted by renowned baritone Roderick Williams and international Pianist Wolfgang Manz, performed with the Leeds College of Music symphonic wind orchestra and accompanied viral flute sensation Azeem Ward as part of his UK tour. His duo Reed & Ivory won 2nd prize in the Leeds College of Music’s track of the year award in 2015 and have premiered pieces written by composers here in Britain and in the United States, most notably at an event spotlighting female composers. Ben has also performed internationally, on tour with a Camerata Orchestra in Germany. Since graduating Ben has been teaching regularly, working as a freelance accompanist and taking part in various community projects at Primary schools across Leeds, with one such project culminating in a performance at the West Yorkshire playhouse. Ben is working hard to continue and build upon the success he has already established for himself, as an incredibly versatile and talented pianist. His current work includes working with award winning theatre group LIDOS who perform 3 shows a year.

If the timing of your event changes then just let me know. I will do my best to accommodate and be as flexible as possible!

Minimal time to set up. It’s just me and Piano! 30 minutes should do it.

Yes very happy to play on the Piano at your venue!

Of course! Give me a list of songs in advance and I’ll be able to play them on the day if your event.

Absolutely! My song list includes popular requests that I have picked up on over the years however I can play anything given the time to learn it before the event.

Standard Prices
All prices include:Music requests in advance of the event, my own electric Piano if needed and a video or phone consultation to talk through details of the event.

Played for our Christmas event at Church. Got into the spirit of the day and made our event all the more enjoyable. Played wonderful Music and had us all singing along.

Performed at our wedding. Ben played all our requests to perfection and really made our special day. He was lovely to all guests and very professional throughout