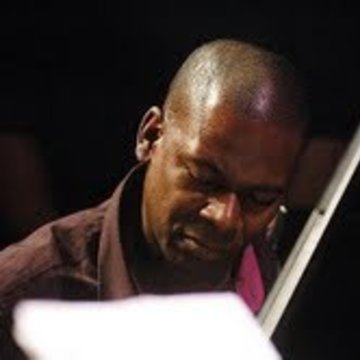 Basil is a fine and experienced musician who has established a successful career as a jazz musician. He perfoms in other genres R&B, Funk..
3 of 4 photos
Pianist
Ilford
Public liability insurance of £10 million

Basil's interest in music started at the piano at an early age but his quest to become a jazz musician started in earnest when he undertook classical training from late 1978 to early 1983. Basil then studied jazz privately with pianist/composer Tim Richards between 1986 to 1989 before rounding off his training at Goldsmiths College in London, 1991. His professional career started in the summer of 1993 as a freelance musician and by leading his trio. Steadily he rose up the ranks to play with some of the leading UK players such as Jim Mullen, Tony Kofi, Dave O'Higgins, Pete Wareham and Renato D'Aiello. In November 2003 Basil produced and released his debut CD 'My Guardian Angel' featuring his quintet and original compositions, which led to a distribution deal with New Note Records. The CD received critical acclaim and air play. Basil has been leading his bands (trio, quartet and quintet) since 2000 and he has performed in such venues as the Royal Festival Hall, Queen Elizabeth and National Theatre Foyers, the Swanage and Ealing Jazz Festivals, The Vortex Jazz Club, The Crypt, Boxford Fleece, Watermills Jazz, The Bonnington Theatre and the Brighton Jazz Club. Basil also did a three year stint - solo piano/piano duos at The Savoy and Claridges hotels. Basil produced his second album 'Sound Reasoning' which was released on 26 October 2009, distributed by Proper Note Ltd. The CD displays 10 more fresh and exciting originals from Basil's pen which confirms his stature as an established composer. The tunes cover his varied approach to jazz incorporating the blues, groove, latin and modern styles. 'Sound Reasoning' received rave reviews including a 4-star rating from Jack Massarik (Evening Standard), Basil appeared on Claire Martin's Jazz Line Up show (BBC Radio 3) to talk about his new album and musical influences. He also performed a solo piano piece for the programme. Three of the main jazz DJs from Jazz FM, Helen Mayhew, Mike Chadwick and Sarah Ward have all recently played music from Basil's 'Sound Reasoning' CD. Basil continues to work with his quintet, quartet and trio as well as a freelance musician. Basil's partnership with Tony started in 1999 and remains strong and vibrant to this present day. His current quartet featuring Tony Kofi - Saxophones, Larry Bartley - Double bass and Winston Clifford - Drums, have been playing at clubs and festivals throughout the UK since 2006 This band is an exciting tight, hard swinging unit in the post-bop and Afro-Cuban vein.

On Saturday after the gig, we went to visit my daughter to celebrate her birthday (50th!!), and this is the first time I have had to write about the truly splendid gig. No problems with remembering. The Basil Hodge Quartet had Basil on piano, and alll of the compositions were his. Ed Jones played tenor and soprano saxes. Oli Hayhurst was our bassistl Winston Clifford was the drummer. Dream team. Basil writes great tunes. Some are beautiful tunes, new, but easy to listen to. Some tell a tougher story and tell it well. His piano playing is a bit Monkish (not a bad thing). His solo in one tune, “Deep Down”, raised a smile on Ed’s face as the right hand made an extended counter-melody to the tune. His careful accompaniment was just the right underpinning to the band. The second set opened with a tune I knew pretty well, “The Thirteenth Amendment”. The tune spoke about the abolition of slavery in the USA, and about unfinished business. The bass entry can be over-egged, but not by Oli. He was brilliantly simple, direct, and a little scary. Everybody absolutely blew their asses off, the audience clapped and hollered afterwards, and one of the musicians said loud enough to hear, ‘follow that’.