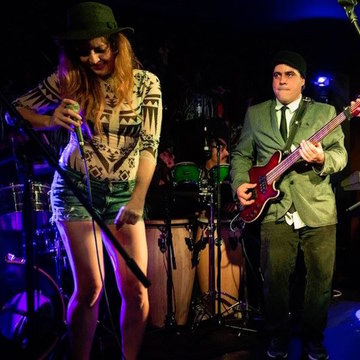 Barrio 6, based in London, is a collective of musicians from all over the world, who bring to the dance floor their distinct and versatile musical styles, directed at the entertainment and enjoyment of anyone with a taste for Latin and Tropical music. Styles such as reggae, salsa, cumbia, pop, reggaeton, timba, bachata, Cuban son can all be found in the mix of sounds and rhythms that give Barrio 6 its unique flavour. Fronted by the captivating presence and powerful vocals of Alexandra, joined by Viva and her searing trombone lines and Lilli on the piano with her powerful harmonies, with booming bass lines from Adolfredo and the explosive percussion grooves from Fernando and Rafael, Barrio 6 transports its audience to a dance party in Latin America. Collectively the members of the band have played on stages such as Glastonbury Festival, Barbican Hall, Royal Festival Hall, Jazz Cafe, Ronnie Scott’s Jazz Club, Womad Festival, Boomtown Festival, and Secret Garden Festival, and are all some of the mainstays of the London Latin music scene in their own right. From hard-hitting salsa classics to laid-back reggae and cumbia rhythms, from lyrical son to reggaeton grooves, Barrio 6 bring the party with them wherever they go.

Barrio6 played at our wedding – and were absolutely perfect! They created a fantastic atmosphere and got everyone dancing. We were really busy leading up to the wedding, but everything was very straightforward to organise with Barrio6. We would definitely recommend them!

Barrio 6 was sensational! Their set was perfect; they managed to thrill both the salsa devotees as well as the guests who were unfamiliar with latin music. In terms of making the arrangements for the night, they were really easy to do business with and completely accommodating to our every last need. The whole experience in booking Barrio6 was a pleasure. I would highly recommend Barrio6.