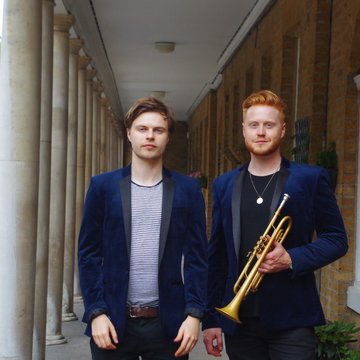 Combining the sound of live Trumpet with DJ, the duo blend the styles of Disco, Funk and House creating the perfect ambiance that will be tailored specifically for your event be it a wedding reception, corporate event, beach party, après ski or cocktail party. Their performances can range from chilled Ibiza style sets to more upbeat and groovy evening sets. The fun doesn't stop here as they are able to source some of the UK's finest musicians to join them if you are looking for a larger DJ live act including percussionists, sax players or anything else. Simply let them know what you are looking for at your event and they will take care of the rest. The duo is made up of: James Mayhew - Trumpet James is a session trumpet player who has performed and recorded alongside some of the top musicians around the world. Since graduating from Guildhall School of Music and Drama James has toured the UK, Europe, America and Asia playing at a number of prestigious venues including O2 Arena, Barbican, Birmingham Symphony Hall, Birmingham Town Hall, Cadogan Hall and Wembley Stadium to name a few. He has made appearances on BBC 1, BBC 4 and ITV alongside performing at major festivals including Glastonbury, Boomtown and Bestival. Jake Hunt - DJ Having graduated from Leeds College of Music, Jake's individual projects and projects he has produced have gained airplay on BBC Radio 1, BBC Introducing and Amazing Radio. Along with this he has written and produced music for film, notably the recently released film Funny Cow which has gained international praise. He's currently producing and writing for a film named Cordelia, due to release early next year, as well as working on a host of other projects.

Music tailored to the event type drawing influences from house, funk and disco.

CH
Charles H
4 years ago, for a Corporate event in Roebuck Ln

Bangers and Brass fitted the bill in every sense. From the initial enquiry to the final beat James and Jake’s professionalism and attention to detail were second to none. For our corporate event we wanted to create a setting where our guests could enjoy the music without it being too overpowering. The combination of the live Trumpet and DJ incorporated all tastes and genres, resulting in an ambient atmosphere that made the event very special. Their performance throughout the evening ranged from more chilled styles to more groovy songs and this flexibility was something many guests commented on. As well as multiple genres James and Jake were more than willing to take requests on demand, with no request being too much hassle. Overall, we would highly recommend Bangers and Brass and can’t wait for our next event!

JF
Jasmine F
4 years ago, for a Private event in Hook Norton

Bangers & Brass created the perfect atmosphere at my drinks party this Summer. They asked what sort of vibe I was after, I gave them a couple of special requests and they took care of everything from there. Having the live trumpet added to the afternoon- they certainly gave us a party to remember.