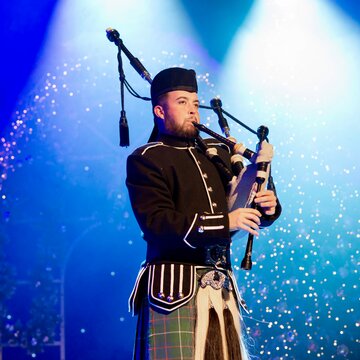 British Champion Bagpiper based in London and the South East of England and Piper for the 2021 Rugby 6 Nations.
3 of 11 photos
Bagpiper
London

With many years experience, George has played at many events such as the Thursford Christmas Spectacular, Basel Tattoo, HRH The Queens 90th birthday. George has recently filmed for the upcoming 'The Kingsman 3' and has featured on the BBC, ITV, Swiss TV, Australian TV and German TV. He has performed at many weddings, funerals, Burns night events and New Years Eve events and has performed all around Europe touring with different bands alongside winning the British pipe band championships. From an early age George was playing the Bagpipes in the Air Cadets and has gone on to represent the Metropolitan Police and the Royal Air Force in functions all around the world, playing at iconic venues such as; Edingburgh Castle, Windsor Castle, The Royal Albert Hall, Menin Gate, Normandy beaches, Annabel's, Goodwood House and the Arts Club, Mayfair.

Scotland The Brave
Flowers of The Forest
Flower of Scotland
Amazing Graze
Highland Cathedral
The Dark Aisle
The Atholl Highlanders
Auld Lang Syne
The little Drummer Boy
Fairytale of New York
Rocking All Over The World
Gabriels Oboe
Dances with Wolves
A Mans A Man
Castle Dangerous
Jim Thompson of Flagstaff
Dawning of the Day
Donal Mclean of Lewis
The Fuddler
Wings
Rowan Tree
La Baum
The Green Hills of Tyroll
The Battles O'er
Lochanside
Ian Mcmaster
Hector the Hero
Itchy Fingers
Clumsy Lover
The Masons Apron
The High Drive
Donald Cameron Powder Horn
Song of the Smallpipe
Gift of a Thistle
Angus Mckinnon
Crossing the Minch
79ths Farewell to Gibraltar
PM Sandy Spence
Abide With Me
Hallelujah
Andrew Warnoc
Archie Beag
The Argyllshire Gathering
Arthur Bignold of Lochrosque
Maggie Cameron
Susan Mcleod
The Smith of Chillechassie
Waltzing Matilda
Balmoral
The Balmoral Highlanders
Barren Rocks of Aden
Battle of The Somme
Battle of Waterloo
The Black Bear
Bonnie Dundee
Boys of Wexford
The Cameronian rant
The Seagull
400%
The Last Tango in Harris
Queen Elizabeths March
The Star of County Down
Our Musical Journey
All The Way To The Top
Smoke on The Water
Plus many more tunes!
Customer questions

My professionalism and making the performance personable to every client.

I will do my best to accommodate the timings for your engagement.

Unfortunately not it will be just the Bagpipes.

I would prefer to have about 30 minutes prior to performing but can work round it if that is an issue.

Of course you can. I always have a chat and we agree on what they would like to be played.

I do indeed! Just a man and his Bagpipe!

I would be more than happy to learn new tunes, just may need to have a chat about what would be liked be played as the Great Highland Bagpipe only has a single scale.

Standard Prices
All prices include:Bagpiper George in full Highland Clothing
Packages
Funeral
Funeral and Memorial services
£190
Drinks reception
Piping in of guests, Piping in of the Haggis and 10 minute solo.
£280
Wedding ceremony
This includes music before the service begins, music during the signing of the register, and music as guests leave.
£290

I am always wary when booking and paying for things over the net - but in this case all i can say it WOW - went above and beyond - from the moment he quoted, George stayed in contact with us, he liased with our funeral director as well as me - and I must have driven him crazy on the lead up as 35 emails bounced back and forth between us - keeping in touch - and ensuring everything was ok for all concerned... He piped mum in to Amazing Grace and he played beautifully and was waiting outside to play more tunes... Not sure I am allowed to do this on here - but here is a link of him playing at mums funeral.... if you scroll down to we helped a family in middlesex today... about ten seconds in you will see my mum arriving and George playing.... I could not recommend this lovely polite young man more..... https://www.facebook.com/Madgwickcarriagemasters/

Totally satisfied with this wonderful musician. George went the extra mile to surprise my mum on her birthday. Communication before the event was smooth, prompt and professional. He arrived in perfect time and as requested, through a secret entrance. Everyone LOVED the performance and he made everyone's day come alive. We cannot thank you enough but we can wholeheartedly and unreservedly recommmend!!

I was very pleased with George, he was very professional and I would most certainly recommend his service for any occasion.

Made my dads funeral very special

George did a fantastic job on our special day and we couldn't have been happier. The bagpipes sounded amazing and he was so professional throughout. Would highly recommend!! Thank you George!

Verified
Jack B, 1 year ago

George played at my dad's surprise 70th birthday gathering. He was fantastic and my dad was thrilled - it made his day. George was very professional and I couldn't recommend him enough. Thank you again.