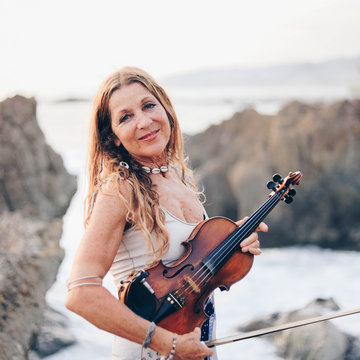 I am a singer violinist and writer arranger. Specializing in jazz, classical, funk , latin and Brazilian music...I have performed worldwide

I am a singer / violinist and composer. I studied violin at the Royal Northern College of Music. I have since made a career specializing in jazz, classical , Brazilian and world music. I have recently returned from Latin America. I am involved in 3 main music groups: My jazz group, The Crazy Rhythm Club, we have a pool of musicians that can provide, Gypsy jazz and modern jazz.. The Primavera strings : a string quartet that can be reduced to a trio or duo...or expanded on, if needed. Latin jazz group Global Wave (a continuation of 'Sirius B', my previous band Brazilian group) Press Release: “Azhaar made her reputation fronting and co-writing for the popular Brazilian jazz group Sirius B. Their album on Freestyle Records was voted no 1, Jazz FM and in Japan- where their music was released on PVine... Her jazz quartet album Out was released on 33 Records and launched at Londons 606 Club She has performed all over Europe, including international festival as such as Montreux , Mai Jazz, Brecon and Glastonbury. After an absence travelling and touring South America, Azhaar returns with her new project Global Wave. She describes the music as new world jazz - original compositions inspired by her travels. The music follows on from Sirius B: Jazz that embraces Latin, Brazilian , African, Arabic and Funk Global Wave are about to start a crowd funding campaign to finish the recording of their forthcoming album ‘Original Love’ The present line up is: Azhaar vocals/violin; Jim Blomfield, keyboards; Guillaume Ottaviani bass; Ivan Moreno Percussion; Paolo Adamo drums..” REVIEWS: “Global Wave’s performance was exciting and wide ranging with the sounds of Latin America highly prominent in the mix. Saffar impressed as both a vocalist and instrumentalist and her original songs were also convincing. The presence of Blomfield in the band’s ranks proved to be a huge bonus, he made a perfect foil for the multi-talented Saffar. On this evidence the début album from Global Wave should be well worth looking out for" The Jazz Mann “One of the most distinctive acts on the jazz world scene” Andy Roberts BBC Radio Wales “Versatile jazz violinist and vocalist, Azhaar made her name fronting the excellent Brazilian Jazz group Sirius B. She returns from travelling and touring the Americas with her new project, Global Wave" Tony Benjamin

JAZZ
BEAUTIFUL LOVE
FINE AND MELLOW
SENTIMENTAL MOOD
OUT OF NOWHERE
DOLPHIN DANCE
UNCHAIN MY HEART
LADY BE GOOD
NICAS DREAM
SOME DAY MY PRINCE WILL COME
1 NOTE SAMBA
THERE WILL NEVER BE ANOTHER YOU
WELL YOU NEEDNT
LIKE SOMEONE IN LOVE
AINT GOT NOTHIN BUT THE BLUES
IT HAD TO BE YOU
LOVERMAN
ALL OF ME
I CANT GIE YOU ANYTHING BUT LOVE
BYE BYE BLACK BIRD
DJANGOLOGY
SEUL CE SOIR
DARK EYES
HOW ABOUT YOU
MOONDANCE
FEELING GOOD
SUMMERTIME
MINOR SWING
MINOR BLUES
ALL THE THINGS YOU ARE
AND MANY MORE.....
CLASSICAL
AIR ON A G STRING - BACH
BRANDENBURG CONCERTI - BACH
CONCERTO FOR 2 VIOLINS - BACH
PAVANE - FAURE
CHANSON DE MATIN - ELGAR
WATER MUSIC - HANDEL
ARRIVAL OF THE QUEEN OF SHEBA - HANDEL
DIVERTIMENTO IN D AND F - MOZART
EINE KLEINE NACHTMUSIC - MOZART
FLOWER DUET - DELIUS
THE TROUT QUINTET - SCHUBERT
ETUDES - CHOPIN
AND MANY MORE...
POP
YESTERDAY - BEATLES
ELEANOR RIGBY
WE CAN WORK IT OUT
THINGS SHE SAID TODAY
COLDPLAY
OASIS
ADELE
FUGEES
IF I AINT GOT YOU
LATIN AND BRAZILIAN
GIRL FROM IPANEMA
ONE NOTE SAMBA
ORFEU NEGRO
AGUA DE BEBER
DESAFINADO
SO DANCO SAMBA
QUIZAS
BESAME MUCHO
LLORARAS
LAGRIMAS NEGRAS

Azhaar was a sweetheart to deal with. She communicated brilliantly before the event finding out all the relevant details and showed up on time and well prepared. She played a difficult piece that was given to her on a very short notice. Will definitely deal with her in future events.

"I have booked The Crazy Rhythm Club for a few special events in central Bath. The group are an absolute pleasure to work with, organised and professional in terms of marketing & promotions as well as very friendly and reliable. They are clearly top-class musicians who love performing and their exuberant playing is impressively virtuosic. Their between song engagement with the audience is also a total delight. They'll leave you uplifted and inspired! For more info please don't hesitate to get in touch, Yours sincerely Sal Lifely, Owner, www.foxymusic.net

Azhaar was a sweetheart to deal with. She communicated brilliantly before the event finding out all the relevant details and showed up on time and well prepared. She played a difficult piece that was given to her on a very short notice. Will definitely deal with her in future events.