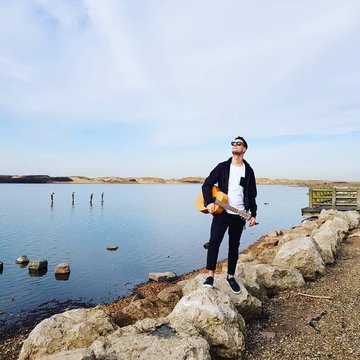 Originally from France, Gus is a singer, songwriter, guitarist who plays all around Liverpool.

Gus is singer, songwriter, guitarist. Originally from France, Gus moved to Liverpool at 18 years old to become a student at LIPA(Liverpool institute for performing arts). After receiving his diplomat, Gus played all around Liverpool for 2 years, organised his own open mic night, played with different bands, done many gigs and festivals. From 2012 to 2015 he traveled, worked and played music around France and Australia, he also got married and became a father. At the end of 2015 he moved back with his wife and child to Liverpool and is now playing all around Liverpool. Gus is a very talented songwriter and is looking for musicians to play with. He is also brilliant at playing cover songs from the 40s to the 80s like "Fly me to the moon - Frank Sinatra", "Hit the road jack - Ray Charles", "Stand by me - Ben E. King" and many others. He also plays the top charts songs like Justin Bieber or Ed Sheeran. As a french singer Gus can play french songs well known from the UK like "La vie en rose - Édith Piaf". Cover band or any band who is looking for a brilliant singer who can play guitar. Gus is your man!

LOVEEEEE GUS! This is the second time we have used him and we would use him again and again! Hes such a lovely guy aswell, thank you gus!!!