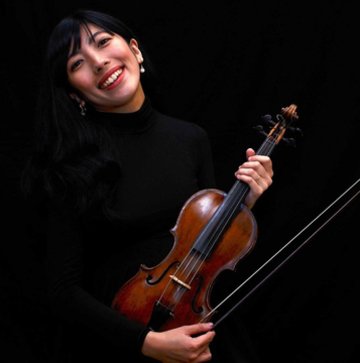 Asuka Sumi is a violinist based in Leeds and specialising in historical performance practice. In 2013, Asuka won the Biber Competition’s “Romanus Weichlein Prize” in Austria; the judges praised her innovative programming, clear style, and a lyrical approach based upon solid technique. Under the guidance of her father, the violin pedagogue Yasuro Sumi, she began to study historical performance on period instruments, subsequently obtaining degrees from the Tokyo Geijutsu Daigaku (Tokyo National University of Fine Arts and Music). From 2009, she studied at the Conservatorium van Amsterdam with Lucy van Dael and obtained her Master degree in 2014 under Sophie Gent. Asuka presently is playing a significant role in the formation of young chamber music groups based in Europe, among them Seconda Prat!ca (CD ‘Nova Europa’ released via Harmonia Mundi in 2016), Fons Harmonicus (winner of Utrecht Fringe Public Prize 2014) and Amsterdam Corelli Collective (winner of Eeemerging 2015). With those groups and as a soloist, she has been invited to perform in prestigious venues and festivals such as Resonanzen Festival in Konzerthaus Vienna, the Sablé and Ambronay festivals in France, and the Cambridge Early Music Festival. Since moving to Leeds in 2015 and invigorating the early music scene in northern England, she is rapidly playing with groups such as Parley of Instrument, Leeds Baroque, Holland Baroque, Nieuwe Philharmonie Utrecht and the International Baroque Players with whom she finds her joy of work with singers and choirs in oratorio, cantata and opera. Finally, Asuka maintains a strong interest in the historical development of violin technique in the 17th century, and is engaged in continual investigation of the ‘Late seicento violin music in Bologna and Modena.’

Asuka was fantastic for our wedding, she arrived on time and even asked what we like like her to wear. Asuka also learnt 2 new songs a couple of days before our wedding and played them perfectly for us. Would highly reccomend!

Asuka performed brilliantly for us as a solo performer and set the tone for the event reception. She was punctual, professional and very easy to work with and would recommend her to others.

Peter B, 4 years ago

I thought the choir and the orchestra were on terrific form... it really is a privilege to direct such a responsive group. I’m sure everyone was also impressed by the excellent soloists in the two concertos, Asuka...

Thank you very much for the nice concert at my birthday. It was a big succes and I surely know that my friends will remember the concert for years!