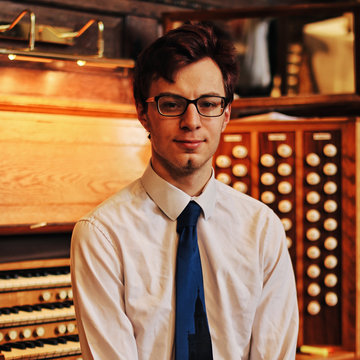 I am the Assistant Head of Music at Birmingham Cathedral. I studied organ performance at the Royal Birmingham Conservatoire.
Organist
Birmingham

Ashley Wagner is the Assistant Head of Music of Birmingham Cathedral, where he is the principal accompanist to the cathedral choirs. He supports the Head of Music, David Hardie, in training the choristers and running the music department. He also directs the voluntary choir ('The St.Philip's Singers'), organises the Monday lunchtime recital series and plays a significant role in the music outreach program. Ashley studied for an undergraduate degree in organ performance at the Royal Birmingham Conservatoire and graduated with first-class honours. He assumed his current position at Birmingham Cathedral during his final year of study. He has studied the organ with Terence Atkins, Robin Walker, Henry Fairs and Daniel Moult and choral conducting with Paul Spicer. He continues his studies with Thomas Trotter. He has previously held positions at Worcester Cathedral, St.Sepulchre-without-Newgate ('the musicians' church') and St.John the Baptist Parish Church, Chipping Barnet. He is a Fellow of the Royal College of Organists. Ashley has won awards through the Northern Ireland International Organ Competition, Royal Birmingham Conservatoire, Essex Organ Competition, Royal College of Organists and Incorporated Association of Organists. As a soloist and recitalist Ashley has performed at the Royal Albert Hall, Amsterdam Orgelpark and several British Cathedrals, town halls and churches. He has broadcast on BBC radio and television.

RE
Richard E
4 months ago

Ashley played sensitivity and did a thoroughly musicianly job. A real find.

DM
Dylan M
9 months ago, for a Concert in Birmingham

"The Vierne in this recital was simply sublime!"

DH
David H
9 months ago, for a Concert in Birmingham

Ashley is an excellent accompanist and soloist