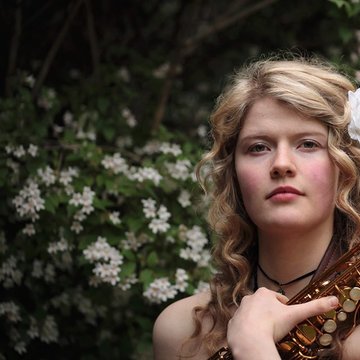 Watch & Listen
About Asha
Prices
Reviews
Home page
Asha Parkinson
Like Asha?
Watch & Listen
Watch
Listen
1-3 of 3 videos
500 Miles High by Chick Corea (1973)
Everything I Love
You're My Everything

Saxophone took over from piano as her main instrument when Asha was 9. Within a couple of years she was winning prizes, completing her grades with distinction and gaining a jazz diploma as well as leading her first band in public performances. At just thirteen, her second band, Out of the Loop was featured in the London jazz Festival and appeared at various leading venues such as Queen Elizabeth Hall and the Bulls Head and she was playing lead alto in the NYJO training band. Asha was a semi-finalist in the 2016 and 2018 BBC Young Jazz Musician of the Year competition. She completed sixth-form studies at The Purcell School of Music and is currently in her final year at The Guildhall School of Music. Her saxophone and jazz teachers have included Mark Lockheart, Iain Ballamy , Christian Forshaw, Carlos Lopez Real, Trish Clowes, Simon Allen, Phil Meadows, Gareth Lockrane and Nick Beston. She continues to lead her own bands and to play in a wide range of other ensembles including the National Youth Jazz Orchestra.

Standard Prices
All prices include:Expenses are separate from gig fee

Thank you for all your amazing skills! It really made our wedding memorable.

Richard B, 2 years ago

the alto of Asha Parkinson, whose quietly intense closing solo — a moment of wonderfully understated drama