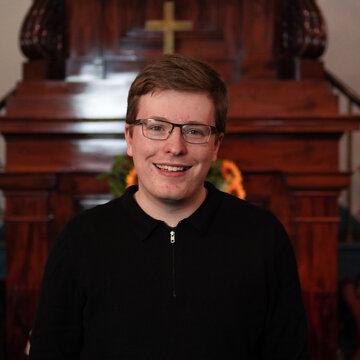 Anthony is an organist, choir director and composer based in Yorkshire where he has been the Director of Music at St Wilfrid’s Church, Harrogate since September 2019. Here, he directs and accompanies the church’s choir as well as being responsible for all musical aspects of the church’s life. He is the Musical Director of the Fairfax Singers, a 40-strong amateur choir based in Burley in Wharfedale, and an Organ Tutor for the Roman Catholic Diocese of Leeds, teaching in schools throughout North and West Yorkshire. He is also the Assistant Director of the Florence International Singing Programme. Between 2018-19, he was Organ Scholar at Southwell Minster where he accompanied and directed the Cathedral’s three choirs, as well as training the younger members of the music foundation. Here he also directed the re-formed West Trent Choir. In July 2018, he graduated with a BA in Music from Robinson College Cambridge where held the Basil Shone Organ Scholarship. He was also the organist for St. John’s Voices and the accompanist for the Cambridgeshire Choral Society. He undertook a number of major tours with Robinson College Choir, St. John’s Voices and The Robinson Consort, a group of 16 singers focussing on contemporary repertoire which he co-founded and directed, to destinations including East Asia, Switzerland, Portugal and the Opera Festival in St-Remy-En-Provence, as well as a number of domestic locations and Cathedrals. As well as his work with choirs, Anthony has also taken on Musical Director roles for a variety of theatre productions in Cambridge including Webster’s The Duchess of Malfi, Lloyd-Webber’s Joseph and his own co-authored show A Very Brexit Musical both in Cambridge and at the Edinburgh Fringe Festival throughout the summer of 2018. Prior to Cambridge, held the organ scholarship at Bradford Cathedral for two and a half years and achieved the ABRSMDip in organ performance in 2014. He has played organ and harpsichord continuo for a number of major works including Mendelssohn’s Elijah, Monteverdi’s L’Orfeo and, in 2017, Handel’s Messiah across a number of major concert halls and venues in Cambridge, Hong Kong and Singapore. In December 2019, Anthony was shortlisted in the final of the BBC Radio 3 Carol Competition with his setting of Imtiaz Dharker's Go To The Child. His music is widely performed across the country, including most recently his setting of the Preces and Responses.

Clients like my willingness to be flexible and help out in the planning process for events, as well as being able to recommend friends and colleagues where necessary for other roles. They then also enjoy musical and engaging performances which are always reliable.

Many of this country's finest cathedrals and concert halls, as well as venues around in the world in Hong Kong, Singapore, Switzerland, France, Croatia and more.

As an organist, I'm heavily influenced by some of the finest liturgical players, and as a pianist, I often try to emulate the best improvisors around, such as Keith Jarrett.

I have performed at the Royal Albert Hall, at St Paul's Cathedral and have conducted a choir live on state television in Bosnia.

I can always try and be as flexible as possible!

For an event requiring an organist, I'd always like to have 15-30 mins to get used to an instrument I haven't played before.

I am always happy to learn new repertoire, and am very happy to discuss any particular requests with clients.

I don't have a piano which I will bring with me, so one will need to be provided where necessary.

Standard Prices
Packages
Choir Rehearsal
This price is per hour. Any accompaniment, direction or leadership for a choir rehearsal.
£35
Church Service
Any music or hymns before during or after the service including choir accompaniments and improvisation.
£75
Wedding ceremony
This includes music before the service begins, music during the signing of the register, and music as guests leave.
£125
Anthony

Anthony played the organ and piano at my daughter’s christening playing both as a soloist and accompanying a vocal quartet who he also arranged for us. Anthony and the singers were nothing short of outstanding. Hairs on the back of your neck good. I was in tears! Cannot recommend enough

Thank you for your kind comments Rebecca! It was a pleasure to provide the music for your service, and glad you were pleased with the day all round.

I couldn’t have been more impressed with Anthony! I hired him through the encore website to play the organ for a one-off occasion and would highly recommend him. His communication was excellent even before making the booking, he was highly professional throughout, and most importantly, he is an excellent organist! He listened to and accommodated all of my music choices without hesitation and played them to the highest level. I very rarely leave reviews, but Anthony deserved a glowing one. Thank you

Thank you Catherine! It was a pleasure to be involved in your event, and glad it all went swimmingly.

Very helpful throughout the planning process. Sounded wonderful at our wedding, we are very grateful

Anthony Gray has recently taken up the position of Musical Director of the Fairfax Singers, a mixed voice choir established in 1996. He has adopted our eclectic repertoire with enthusiasm and genuine interest. Clear direction and consistency means that he works very well with our excellent accompanist. Anthony has a sympathetic approach to the choir members and the ability to make constructive criticism feel encouraging. We are really enjoying his leadership.

I had the pleasure of working with Anthony Gray in Cambridge for two years, when he was accompanist to Cambridgeshire Choral Society. During that time he was unfailingly well prepared, punctual and conscientious. Anthony is a fine musician with a good sense of style and considerable experience working with choirs. He has a wide range of musical knowledge and will be an asset to any organisation or individual with whom he works.