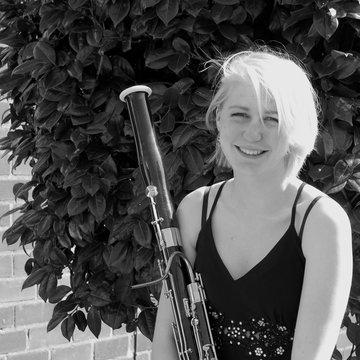 Anna began to take an interest in music at the age of 7, after swapping ballet and acting lessons to pursue her talents in music. She began playing the piano and ‘cello, but when she joined secondary school, took a different route and picked up the bassoon. She fell in love with the individuality of the instrument, and was inspired to take her talents further. After gaining a music scholarship to St Margaret’s School in Exeter, she threw herself into the many musical activities available, including orchestras, wind bands, and choirs. She had many successes during this time, including becoming a finalist in the prestigious Woodard Young Musician of the Year competition, playing in a local production of Oliver!, and holding the contrabassoon seat of the highly appraised South West Youth Orchestra. She then went on to further her talents at the renowned Wells Cathedral School, as a bassoon specialist. She was, again, thrown into the many musical activities at this institution, including WCS Symphony Orchestra, Wind Ensemble and she also sang with the WCS Big Band and highly acclaimed all female choir 'Choralia'. In her first year, she also gained the contrabassoon seat at the National Youth Wind Ensemble, under the direction of respected conductor, Phillip Scott. In her final year at Wells, she auditioned at many of the UK’s best music colleges, and has decided to take her place at the Guildhall School of Music and Drama, with a music scholarship.

It was great to work with Anna at the weekend. She was completely professional and punctual throughout our correspondence, and her singing at the wedding itself was of a very high standard. I would be delighted to work with her again in the future!

Phenomenal! Incredibly talented musicians who had no problems getting the crowd going. The music was fantastic and everyone had a blast. The group are a really lovely bunch of people too. Hope to see you again soon!

Singer (mezzo soprano)s in the UK
Bassoonists in the UK