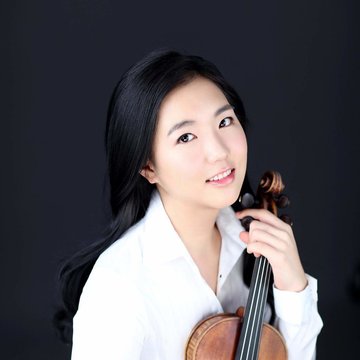 BIOGRAPHY Born in Seoul, South Korea in 1994, Anna started learning the violin at the age of six. In 2002, she moved over to the UK and studied with Lutsia Ibragimova for two years before being accepted into the Yehudi Menuhin School at the age of ten with a full scholarship. She started her studies with Natasha Boyarsky and throughout her time at YMS she has performed in the school’s Summer Orchestral Concerts, the Menuhin Festival in Gstaad, Reims Cathedral, Thaxted Music Festival, Banstead, Leamington Hastings and the Royal Festival Hall. She has also performed Szymanowski’s Nocturne and Tarantella live on radio as part of Sean Rafferty’s programme; “In Tune” on Radio 3, in 2012. She has completed her Bachelor of Music degree at the Royal College of Music with First Class Honours and has furthered her musical studies with Radu Blidar from September 2016 until present, having just finished her Masters in Performance with Distinction and starting her Artist Diploma degree this September. Anna’s notable past solo performances include playing at the Wigmore Hall, numerous lunchtime and showcase concerts at the Menuhin Hall, the Brighton Dome, Mozart’s Violin Concerto No.4 with the Munich Kammerphilharmonie in 2009 and taking part in solo recitals at the Kumho Arts Hall in Seoul, Korea. Anna has had masterclasses; both solo and chamber, including those with Maxim Vengerov, Igor Ozim, Zvi Zeitlin, Heinrich Schiff, Nam Yoon Kim, Alina Ibragimova, Nicola Benedetti, Peter Herresthal, Vasko Vassilev and the Wihan Quartet. Anna has actively engaged in chamber music with her piano chamber group the Adamo Quartet, having won the Albany Piano Chamber Competition in May 2014. Anna also took part in the RCM Rising Stars concert series at the Cadogan Hall in June 2015, playing first violin in Mendelssohn’s Sextet Op 110. Anna was successful in gaining a place in the London Symphony Orchestra’s String Experience Scheme 2015-16 and has played under the baton of Simon Rattle, Pablo Heras-Casado and Daniel Harding thus far. Anna also successfully auditioned for the BBC Symphony Orchestra’s Pathway Scheme 2016-17. Anna currently plays on a violin by Joseph Rocca, 1848 and gratefully acknowledges its loan from the Royal College of Music, London. Anna is an Ian Stoutzker Prize Scholar supported by a Joan Weller Scholarship for her studies at the RCM.

So Will I (100 Billion X)
You Say
What A Beautiful Name
Do It Again
Reckless Love by Bethel
You Raise Me Up
A Thousand Years
Can You Feel the Love Tonight
Gabriel's Oboe
Grow Old With Me
Here, There and Everywhere
Highland Cathedral
I Will Be Here
The Lord's Prayer
Sunrise, Sunset
Wedding Processional
All Of Me
Make You Feel My Love
All You Need Is Love
Marry You
Salut D'Amour
Air On the G String
Claire de Lune
Somewhere Over the Rainbow
Can't Help Falling in Love
Like A Star
Your Song
I'm Yours

Anna was very professional and prepared, and contributed well to the project.

Mozart’s Sinfonia concertante K364 drew on young soloists from the Yehudi Menuhin School. Anna Lee was the polished and lyrical violinist, with Nazli Erdogan a warm and sensitive viola player. They proved very well matched and created a pleasing ensemble with the orchestra. The dark second movement Andante was particularly effective in its mood setting.