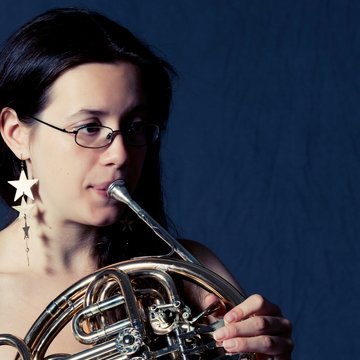 Anna graduated from the Royal Academy of Music with an MMus(Distinction), having won the Dennis Brain Horn Prize and studied with Martin Owen, Katy Woolley, Michael Thompson, Richard Watkins and Roger Montgomery. She completed her bachelors at the Royal College of Music in 2014 with first class honours, having won the Richard III Prize and been an RCM Concerto Competition finalist in her final year. There, she studied the modern horn with Tim Jones, Jeff Bryant, Simon Rayner, John Ryan and Julian Baker, and the hand horn with Sue Dent and Roger Montgomery. She has played with Mahler Chamber Orchestra, Orchestra of the Age of Enlightenment, Dunedin Consort, London Sinfonietta and Sinfonia Cymru, as well as performing Brandenburg 1 with leading UK baroque ensemble Florilegium. She is currently on trial with Royal Northern Sinfonia. She has toured with the Gustav Mahler Jugendorchester and the European Union Youth Orchestra; as a student, she furthermore auditioned successfully for a number of training schemes with UK orchestras, including the Academy of Ancient Music's AAMplify Orchestra, LSO Brass Academy and playing guest principal horn with the LPO Future Firsts Ensemble. Anna is also passionate about performing solo repertoire. She has performed Mozart Horn Concertos 1 and 4 on the natural horn with the Amadè Players on several occasions, and Mozart 3 and Strauss's 1st Horn Concerto with both orchestras at Harrow Young Musicians, the organisation that originally kindled her love of music. On the modern horn, she was the 2015 winner of the Paxman Prize; 2015 also saw her first appearance at the British Horn Society’s annual meeting in Liverpool as a featured soloist. Anna also appears frequently on the jazz scene, holding the horn chair with the National Youth Jazz Orchestra and appearing with them in settings such as the BBC Proms. She has also headlined at Ronnie Scott's Jazz Club with the Richard Shepherd Nonet, playing the music of Miles Davis's Birth of the Cool and has appeared several times at the EFG London Jazz Festival. Anna has received generous support throughout her studies from the Royal Academy of Music, Help Musicians UK, the Kathleen Trust, the Yorkshire Ladies' Council of Education, the Women's Careers Foundation and the Peter Hinckley Trust. The Countess of Munster Trust and Help Musicians UK continue to support her in travelling to Amsterdam monthly for private natural horn study with Teunis van der Zwart. Her Jungwirth Lausmann natural horn was purchased with the help of the Wolfson Foundation, the Macfarlane Walker Trust and the EMI Music Sound Foundation - support for which she is hugely grateful.

If the Elgar had eschewed the overtly emotional, Tchaikovskly’s Fifth Symphony had it in bucketfuls. After a slow sombre opening – and tempi throughout tended to be on the slow side – the brass let rip and it was obvious we were in for a thrilling ride. The long horn solo at the start of the reflective second movement was beautifully crafted by Anna Drysdale,