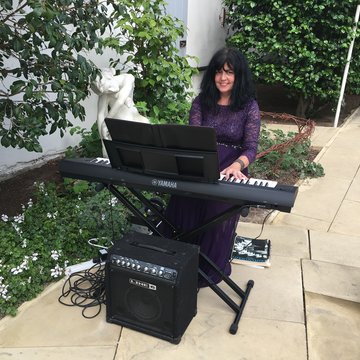 Anita has had a pretty eclectic career and is an all round musician, equally happy chatting to ceilidh or party audiences as in more formal concert settings. While at RCoS she won many prizes as a solo pianist, chamber musician and accompanist. She has a lifelong passion for many musical styles, performing as a classical pianist, singer, jazz, funk and folk musician and enjoying composing and arranging in many styles to improve her performances. She has appeared in many television, radio and film appearances, most notably as a body double for Rachel Weisz. She was a weekly hotel pianist at Gleneagles, Sheraton and Garfield House Hotels in Scotland. While raising her family in London, Anita was a busy Head of Music, directing many musicals and theatrical performances, arranging and conducting choral concerts culminating in her Secondary Headship qualification. She is an examiner in music. She performs in many weddings, corporate events and other parties in addition to classical repertoire, as people warm to her due to many years of experience in chatting to people and drawing them into her performances. She has her own car and electric piano, a plethora of standard repertoire, is punctual (usually early!) and very reliable. Anita is also available as an accompanist, repetiteur and tutor of piano, singing and theory up to Diploma/Degree standard.

Red, red rose
Stormy Weather
A Whiter Shade of Pale
Angel Eyes
amazing Grace
Black Coffee
Blues at Dawn
The Banks and Braes
Candle in the Wind
Danny Boy
Dancing Queen
Don’t Cry for me Argentina
East of the Sun
The Entertainer
Fever
Fernando
Fly Me to the Moon
Fools Rush In
For the Good Times
From Both Sides Now
The Greatest Day - Take That
The Girl from Ipanema
Happy Birthday
Hey Jude
I don’t know how to Love him
I left my Heart in SAN Francisco
I let a song go out of my heart
I’ll never fall in Love Again
I’ll remember April
I’m beginning to see the light
In a Sentimental Mood
In walked Bud
I say a Little Prayer
I Surrender Dear
It’s Impossible
I Waited For You
I write the Songs
If you Leave me now
Just the Two of Us
Just the Way you are
Killing me Softly
Love is Blue
Love me with all your heart
Lover Man
Maybe this Time
Mamma Mia
Mean to me
Memories of you
Michelle
Midnight Sun
Money money money
Mood Indigo
Moonglow
More than you know
Music Box Dancer
The Night we called it a Day
Once in a lifetime
One Note Samba
Perdido
Sailing
Piano Man
Satin Doll
Slightly out of Tune
Smile
Solitude
Sometimes When we Touch
Sophisticated Lady
Spanish Eyes
stardust
Stars Fell on Alabama
Stormy Weather
Streets of London
Strutting with some BBQ
Sunny
Sunrise, Sunset
Take the A train
Thankyou for the Music
The Winner Takes it All
These foolish things
This Guy’s in Love with you
Tiny Dancer
Too Young
Try a Little Tenderness
Tuxedo Junction
Undecided
Unforgettable
Until it’s time for you to go
Wave
What the World Needs Now
Where is the Love
Without You
Yesterday
Yesterday when I was young
You light up my life
Your song
Summertime
Oh Mio Babbino Caro (just a rough idea, I can do hundreds)
Caro Mio Ben
Michael Nyman
Einaudi
Customer questions

I’m flexible but do try to let me know over 24 hours in advance, so I can make the necessary arrangements for additional equipment, musical requests etc.

Yes I can feed through the PA system for no extra charge.

Minimum 30 minutes, preferably more to sound check unless you have a piano on site

Yes but please send me a video via text message.whatsapp if possible for me to check tuning and condition of acoustic piano, otherwise i'd bring an electric one.

Of course, and more. I can learn anything you like.

Yes, I have a variety of keyboards etc

Of course, please give me a couple of weeks to download and learn, but my sight reading is pretty good too.

I can be quite a laugh when chatting to audiences, relaxed, interaction. I try to help everyone have a good time, and am happy mingling and chatting and performing requests or have someone singalong where appropriate.

Albert Hall in front of Queen Mother, for her birthday

Anita played a variety of songs as the guests entered, then a special medley of Take That songs for my entry and our exit, followed by a selection of jazz, pop and blues for the meal. A fantastic pianist, organised, punctual and made the effort to do guest requests

Verified
Kath A, 1 year ago

A superb concert with a mixture of piano solos and songs. Anita organised and performed, while keeping a running commentary with the audience, thoroughly enjoyable

Anita played for our recent wedding. She sang some classical songs for the formal registry event, then played background music during the meal. Nothing was too much trouble for her. Very enjoyable

Anita played a wide variety of jazz classics and this added well to the ambience of the evening. Professional and punctual, a seamless performance

Anita played for my birthday party while I was visiting the UK from California. We asked her to play songs from the USA, and she came up with lots of different pieces and styles. The party was a great success thanks to the sparkling and vivacious performance. We had so much fun dancing and singing along to the perfect music she played. A lovely performance created a memorable time we will be talking about for years. I would not hesitate to engage Anita again. Very professional and so very entertaining!

Anita plays professionally for our male voice choir each week and at a number of our public concerts, starting on Sat 24th November onwards.

Anita played keyboards for our ceilidh and was early, had her own equipment which she set up and practised on. She was professional and also sang some Scottish songs, which delighted the audience during breaks from the dancing