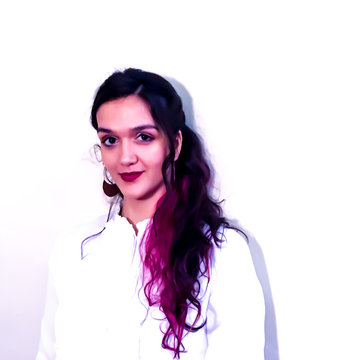 Check availability and get a free quote now - no commitment to book
From£240
Watch & Listen
About Anita
Song list
Reviews
Home page
Anita Datta
Like Anita?
Watch & Listen
Watch
Listen
1-2 of 2 videos
Cavalli Musiche Sacre: Music from a time of Plague by The Swan Consort
Organ Voluntary No. 8 in C major

Anita is an organist, pianist, conductor and soprano experienced in wedding/liturgical and concert contexts. Can provide choirs.
3 of 4 photos
Organist
London
Public liability insurance of £10 million

Anita Datta is a conductor, organist, pianist and soprano known for her work with voices. An exceptional keyboard player, she is experienced in providing music for weddings and other liturgical contexts as well as performing in concert settings. Former Organ Scholar of Sidney Sussex College, University of Cambridge, Anita held the post of Director of Music at St. Mary’s Church, South Woodford from 2014-2018. She is currently freelancing whilst she completes her PhD. A talented organist, choral director and high soprano voice with a wide range of experience in professional-standard settings, Anita can perform solo and is also able to fix choirs for events from her professional contacts in the world of choral music. Anita started her organ studies at the age of 14 after obtaining a scholarship from the Royal Schools of Church Music. This came about in recognition and support of her work as organist at Our Lady of Lourdes Catholic Church in Hessle, East Yorkshire. Here she accompanied the Sunday Services and later started up a small amateur choir to enhance these and feast-day services, which continues to this day. She also spent two terms observing at Beverley Minster in 2010-2011. This included assisting the organist at evensong and special services, and attending and observing choir rehearsals, including the training of the boy choristers. Anita was elected to the organ scholarship at Sidney Sussex College, University of Cambridge from September 2011-July 2014. In addition to responsibility for accompanying three choral services a week this post has entailed conducting, and extensive administrative and leadership roles. International tours have included Austria, the USA and Italy, where Anita played the organ in St. Peter’s Basilica, Vatican City. She features on the choir’s recent recording “Great Anthems”, and in both continuo and solo capacities on the Obsidian label recording, “William Croft – Burial Service & Anthems”. In 2014 she was a finalist in the Northern Ireland International Organ Competition. During her time at Cambridge Anita studied vocal technique with Ghislaine Morgan, who continues to guide both her care of amateur and semi-professional choral voices and the exercise of her own soprano voice. Anita performed extensively with Sidney Sussex Choir as a vocalist when not at the organ, and when not at the keys is regularly invited to sing at weddings and in choirs across London. Anita has extensive experience as a solo performer for both private and public events and has an extremely wide range of experience as an accompanist, church organist and choral/solo singer garnered over a number of years. Formerly a student of the Organist Emeritus of York Minster, John Scott Whiteley, Anita studied organ in Cambridge with Stephen Farr for three years. She has also benefited from organ tuition with teachers such as Jacques van Oortmerssen, William Whitehead and Robert Quinney, and lessons in Choral Conducting from Paul Brough and Patrick Russill. Anita also plays the piano, which she studied under the acclaimed concert pianist Caroline Clemmow. In her teenage years she played first flute in the Hull Philharmonic Youth Orchestra and various other high-profile Symphonic Ensembles based at the Albemarle Music Centre in Hull. She looks forward to finding the time to take her RCO examinations at some point in the near future!

just wanted to say how grateful we were that you agreed to sing at our wedding, your voice was truly beautiful and it made our day.

Please acept our grateful thanks for your wonderful performance last Sunday at the Charity Function. Your music and singing was very well received!