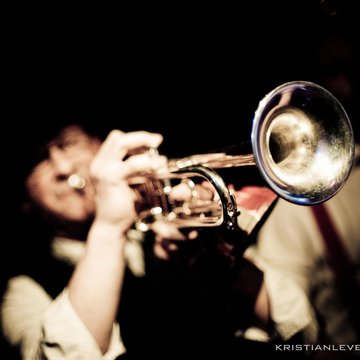 Angus Moncrieff is a London-based trumpet player, composer, orchestrator, band leader and educator. He has played trumpet professionally for 15+ years, and specializes in jazz, swing, and contemporary styles. He has worked with festival favourites Molotov Jukebox since 2010, and in that time they have recorded two albums, made numerous videos, and performed 100s of shows in the UK, as well as in Brazil, Mexico, and all over Europe. Other artists and groups he has performed with (and/or recorded with) include soul legends The O’Jays, vintage swing band The Alex Mendham Orchestra, latin band Riamba, soul singers Reuben Richards and Steve Brookstein, and jazz singer Eileen Hunter, as well as his own jazz quartet. He has performed at many of London’s top jazz venues, including the 606 Club, The Vortex, and Pizza Express in Soho. He has also played trumpet on the scores for numerous TV shows, including The Collection (Amazon), Ripper Street, Miss Marple, The City and The City, Primeval, and others. Angus is also a composer and orchestrator, with extensive experience writing for film, TV and theatre. He has worked as orchestrator on numerous scores for composer Dominik Scherrer, including The Collection (score nominated for an Ivor Novello award), Ripper Street, Miss Marple and Monroe. Angus has composed the scores for three fringe theatre productions. He has also written horn and string arrangements for Molotov Jukebox, Steve Brookstein, Kiki Kaboom, Riamba and others. Angus also teaches music in schools and privately, and is Musical Director of the John Ongom Big Band, a community ensemble, which performs several times each year at local venues. Angus graduated summa cum laude from Berklee College of Music in 2002 with dual majors in Film Scoring and Jazz Composition. At Berklee, he was awarded the Georges Delerue Scholarship (for Film Scoring) and the Toshiko Akiyoshi Scholarship (Jazz Composition). Before making music his career, Angus graduated from the University of Leeds with a degree in Mathematics.

Really made my 1920s theme night go down well. Made a good atmosphere and I would recommend to anyone to book.

Verified
Alan B, 4 years ago

I can't rate The Moochers highly enough. They did an amazing job and worked really well with the dancers. Kathleen's voice is beautiful and band sounded amazing. I cannot recommend them highly enough - definitely book these guys if you are having a 1920's / Great Gatsby themed event, you will not be disappointed.

It just wouldn’t have been a Molotov Jukebox show without famous tracks from their last album Neon Lights and Don’t Panic which kicks off with a fabulous trumpet solo by Angus Moncrieff.

Thanks for all the music on the series, you did an amazing job!