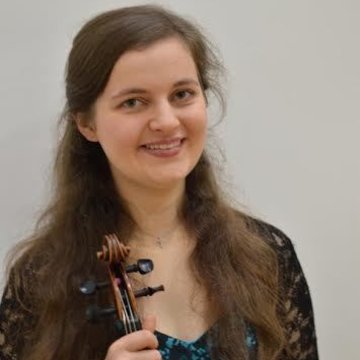 Angelika is an oboist, violinist and viola player. She studied at University of York and the Royal Academy of Music.
3 of 8 photos
Violinist
Northwood
Public liability insurance of £10 million

Angelika became a scholar at the Guildhall School of Music and Drama after winning the Jack Petchey Award for 'Outstanding Achievement' in 2011. In that year, she also achieved a DipABRSM in oboe performance and went on to perform Mozart's 'Oboe Quartet' in Buckingham Palace, in the presence of Princess Anne, in 2012. Angelika is the Founder and Principal Conductor of the Johannes Ensemble. Orchestral playing forms a vital role in her life having played with various ensembles, including the Orion Orchestra, where she was involved with recordings in Abbey Road as well as a UK tour with Rick Wakeman's 'Journey to the Centre Earth'. Additionally she has taken part in side-by-side projects with the London Philharmonic Orchestra (violin), and the BBC Symphony Orchestra (oboe). Angelika graduated from the University of York with a 1st Class Honours degree and a Distinction in a Performance Postgraduate Diploma. She also holds a Masters with Distinction from the Royal Academy of Music.

"We hired the Howell String Quartet for our wedding back in May. They were fantastic - very professional and sounded great! Good repertoire including classical and pop covers, and they were really helpful in suggesting pieces for the ceremony. They even managed to put together a cover of the Cantina band song from Star Wars (our wedding was May the 4th...!) Would highly recommend them 😊

Verified
Peter B, 2 years ago

We booked the Howell String Quartet for our wedding ceremony and reception in July, and they were absolutely brilliant. From our first enquiry to the wedding day itself, they were very helpful, accommodated our musical requests and presented a selection of additional music from a variety of genres from which we could choose. They responded to messages quickly, which made planning the day that bit easier. I had written a piece for them to play for the arrival of the bride, which they performed flawlessly having only been given it on the day. Thanks for your brilliant performances!