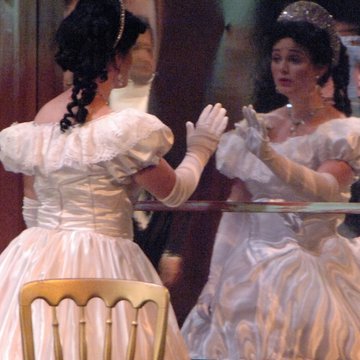 Angela Good was born in Yorkshire and cut her teeth with Leeds Youth Opera; she went on to read Music at the Royal Welsh College of Music and Drama studying voice under Miriam Bowen. In much demand as a performer and musician recent operatic roles include ‘Rosalinde’ in Die Fledermaus, ‘Susanna’ in Marriage of Figaro, ‘Violetta’ in La Traviata and ‘Lui’ in Turandot. Angela regularly performs with The Engelfield Ensemble; comprised of Soprano, 2 Clarinets and Piano. The ensemble performs a varied repertoire in the form of concerts and functions with programmes including Operatic Arias, Vocalise, Art Songs for Voice, Clarinet and Piano by composers including Delius, Schubert, Spohr, Arthur Bliss as well as lighter American Song Book numbers arranged for the quartet. Angela is also part of a guitar and voice duo performing Jazz songs at intimate events and functions. Recent classical concerts include soloist spots with the Radlett Choir, Marlow Community Choir, Twyford Singers and Reading Haydn Choir with repertoire including ‘Dido’ in Dido and Aeneas, Soprano soloist in Gounod’s St Cecilia Mass, Rutter and Faure Requiem, Vivaldi’s Gloria, Handel’s Messiah and ‘Israelitish Woman’ in Judas Maccabeus. I sing at private events from Weddings and Funerals to big event birthday parties or celebrations of life. Angela is an experienced and sought-after singing teacher working in a number of independent Berkshire schools as well as privately; regularly coaching for exams, national choirs and auditions. Angela enjoys diversity also teaching piano and music theory as well as accompanying exams, adjudicating music competitions across the UK and working as a specialist vocal examiner and Head of Singing for The Music Teacher Board.

My goal as a classical singer is always to create an emotional change in the room. Clients often tell me that I caused them to have goosebumps or the hairs on the back of their neck to stand up. I feel this is a good measurement of goal achievement!

All the great opera singers, male and female as well as the many singers of art song across the globe.

I will absolutely try to make it work, just let me know!

30 minutes - a run through with any accompanist as required for example before a wedding ceremony.

Yes we can discuss what music you want in detail with me offering suggestions if you need support. I am also happy to learn new repertoire in advance subject to suitability.

Depending on the venue and the event I will often sing acoustically for example in a service. I do also have a PA should one be required as well as an electronic piano should I need to accompany myself.

Yes of course as long as they will suit my voice and sound good.

Standard Prices
All prices include:Consulation and song options/choice included. Equipment to be agreed case by case.
Packages
Wedding ceremony
This includes music before the service begins, music during the signing of the register, and music as guests leave.
£300

Verified
Katie B, 2 years ago

Angela sang a duet with my god-daughter during the signing of the register. It was a very moving and beautiful rendition of 'A Whole New World' and Angela even recorded the piano accompaniment herself to make sure it was perfect. Everyone commented on how special it made the ceremony and we would definitely recommend Angela Good to sing at anyone's special event! Katie Botham

Angela sang beautifully as the soloist in our choral concert. Relaxed, well-prepared and professional, her rehearsal with the choir was a delight. The solo items fitted perfectly into the programme: exquisitely moving Italian arias and charismatically performed show songs. We are looking forward to working with Angela again soon!