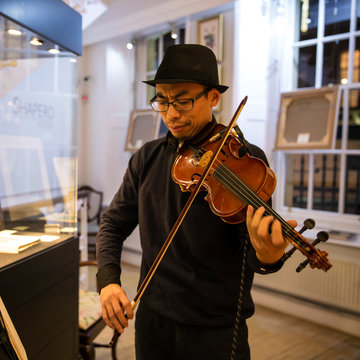 2003-2019 Freelance Violinist/violin teacher Principal Second violin of London City Philharmonic Working for Greenwich Borough Music Hub service 2016-.  Appointed the leader of Chamber Academy Orchestra 01-04-2016.  Violin tutor at Cherry Pie Music School in Wimbledon, London. 2014-  Music teacher at Marathon Science School in Surrey Quays. I am currently teaching music to the classes of year 7 and 8. 2014-  Violin tutor at Muswell Music school in North London area. 2012-2015  Currently teaching violin privately, bringing school to the pupil’s home. 2003-  I have been hired as a session violinist for studio recording and orchestra on tour.  I started teaching violin in John Kelly secondary school in London (2003), I have been teaching also privately until present day. January/2003 - 2016 Professional performance experiences  Leader of Chamber Academy Orchestra, for the summer term concert on the 10th of July 2016. Leading the orchestra in collaboration with Aylesbury and Uxbridge choirs Performing Verdi Requiem on the 21st (Thame, Oxfordshire), and 22nd (Hayes) of May, 2016.  Performed with Ernest Read Symphony Orchestra on the 28th of March 2016.  Leading 2nd violin with the London Classical Soloists for the conducting masterclass, in March 2016.  On the 10th of June, performed as the leader with Collaborative Orchestra in St. John’s Smith Square. This marks the 2nd concert of the world series: Hungarian composers. The programme: Hungarian dances No. 1, 4&5 by Brahms. Hungarian Rhapsody for orchestra, Divertimento by Bartok.  Performed with The Vultures at Alice Wicked Festival on the 27th of April, 2015.  On the 27th of February, I performed as the leader with Collaborative Orchestra, the repertoire includes Karelia Suite by Sibelius, and Lark Ascending by Vaugh Wiliiams.  Performing with Collaborative Quartet and Orchestra, in St. John’s church in Waterloo, London. 13th of September, 2014  The Vultures performed in Beatrice Camden, 19th of July 2014.  Performed with Collaborative Quartet and Collaborative Orchestra in St. John’s Smith square(11-April-2014), 3 Tango show pieces by Albeniz, Carlos Gardel, and Piazzola. At the second half of the concert, I performed Scheherazade, symphonic suite for orchestra op. 35, by Rimsky-Korsakov, with Collaborative Orchestra.  On electric violin with the rock group The Vultures, performed at the Dublin Castle, Camden, 13-Dec-13 and Finsbury pub on the 11th of Jan, 2014.  Performed Jazz violin with Stephano D’Silva quintet at the 12 bar 27-Nov-2013.  As co-principal first violin with Collaborative Orchestra in St John’s Smith square on the 2nd of November. The repertoire includes Hungarian dance by Brahms, guitar concerto by Rodrigo, Die Fledermaus overture by Strauss.  Performed jazz violin with Stephano D’Silva quintet in Hidden River festival 2013 in Finsbury park.  Earlier this year, I performed with the acoustic rock group called The Vultures, we have done several gigs at Wheelbarrow, Water Rat, Comedy club, and Barfly.  Performed was with Collaborative Orchestra, in Wapping St Patrick’s church and St Matthew’s church in Richmond, performing Beethoven Symphony No. 5. Slovakian Dances by Dvorak, and other popular short pieces by Bizet and Sibelius.  Performed 5 shows in a week, called The Pirates of Penzance by Gilbert and Sullivan, performed in Kingston College theatre. Production by Mayhem Theatre Company.  I performed with Collaborative Orchestra in St. John’s Smith Square in London. The orchestra was newly founded this year and the debut concert received a great review, and was broadcasted by the BBC radio.  I performed with a string quartet for the soundtrack of a short film presentation, conducted by Ms Tsu-Chi Liang from Goldsmith University in London.  I performed in the community centre in Teddington, near south London, as a jazz solo act for the London Olympic 2012.  Part of the Easter celebration concert, I played the first violin in the piece called Creation composed by Haydn, with the Amadeus Orchestra, the concert took place in Watford, near North London.  Here are the on-going music projects I am participating (as a violinist) at the moment: The Vultures: The London based rock act striving to be original in style, as part of the instrumental experiment, the guitar is replaced by the string ensemble for a unique sound.  The Jazz project: I am collaborating with Shogo Hino the guitarist, writing and re-inventing songs with Jazz flavour. Moreover, I’m currently a member of the Stephano D’Silva’s Jazz group, the line up are guitar, Saxophone, drum, bass and violin. For those who are seeking: violin instruction for their children, ones who need assistance with violin exams, a complete beginner or just want to have fun and play a few tunes on the violin, here is a great place to start. I have been a violin tutor for the past 8 years. I came from a traditional violin background in Asia, I started with the Japanese method(some Suzuki method) and then progressed to my first teacher in the UK, Ms Eszter Katona. She was the winner of Carl Flesch international competition, it was with her I delved deeper in to the European violin technique. Being familiar with the both traditions, enable me to approach learners with a communicative and flexible means; which can be understood on a personal level. In other words, a tailor made lesson for each learner. The teaching session is essentially student based, as a performing artist myself, I perform a wide range of music, from classical to pop to Jazz. Below are the teaching styles I offer: 1: I teach the ABRSM system, the music exam of the Royal schools of music. 2: Improvisation or Jazz. 3: Upon request; I provide assistance on learning any piece of music. 4: Beginners welcome(children or adult) Tuition Fee: One hour-50 pounds(includes textbook/sheet+home visit) 1/2 hour-30 pounds(includes textbook/sheet+home visit) Home Visit: I am based in North London, and as long as it is reachable by public transport, I will make it to your home for the lesson. You can learn in your own comfort with help with your practice routine, in order to achieve the best possible result.

Andy has a great personality and brilliant violinist. I hope to work with him again in the near future.

We were over the moon with Andy's fantastic performance at our garden dinner part. What a seasoned professional. He played everything we asked him to and more. He helped to provide a truly magnificent evening. We would book Andy again in a heartbeat. Our guests were so impressed. Thank you for such high calibre of musicians Encore. Sharon and Kevin

We just want to say a big thank you to Andy, very professional, music just perfect , so talented , made our day magical. All our guest sent compliments regarding Him. Well done Andy!

Andy has a great personality and brilliant violinist. I hope to work with him again in the near future.

We were over the moon with Andy's fantastic performance at our garden dinner part. What a seasoned professional. He played everything we asked him to and more. He helped to provide a truly magnificent evening. We would book Andy again in a heartbeat. Our guests were so impressed. Thank you for such high calibre of musicians Encore. Sharon and Kevin