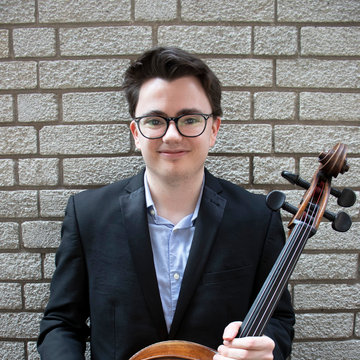 Andrew Harsley is a cellist based in Manchester who recently graduated from the Royal College of Music in London.

Andrew Harsley began cello lessons at the age of five in Norwich with Maja Passchier. In 2012, Andrew took up a 6th Form place at Chetham’s School of Music in Manchester where he continued his cello studies with Gillian Thoday. Andrew completed his Bachelor’s degree at the Royal College of Music in London, where he studied with Melissa Phelps and was a regular performer with the RCM Orchestras and as a member of various chamber groups and in September 2018, Andrew began his postgraduate studies at the Royal Northern College of Music in Manchester. Andrew was recently selected for the BBC Philharmonic's Professional Experience Scheme and has since performed in one of the orchestra's Media City concerts that was recorded for broadcast on Radio 3. Andrew has been principal cello of the London Moonlight Symphony Orchestra since 2017 and recently made his concerto debut performing Elgar’s Cello Concerto with the Wymondham Symphony Orchestra.

Andrew did an amazing job playing the cello at our wedding! Thank you

eloquent account of the first movement of Elgar’s Cello Concerto