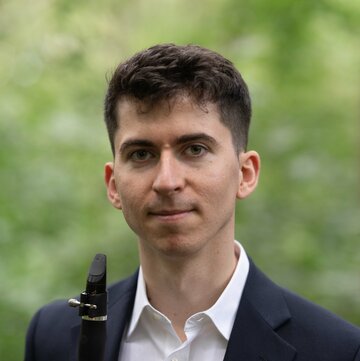 London-based clarinettist currently studying at the Royal Academy of Music

Originally from Cambridge, Andrew Farnden is a clarinettist studying for a Master’s degree at the Royal Academy of Music as a scholar, under the tutelage of Timothy Lines and Ben Mellefont. He also studies bass clarinet with Laurent Ben Slimane and classical clarinet with Eric Hoeprich. In 2018 he completed his undergraduate studies with Andrew Marriner at the Guildhall School of Music and Drama. Andrew is primarily an orchestral player, and rehearses regularly with orchestras across London, including the Guildhall Session Orchestra. He also has experience performing with orchestras such as the Hastings Philharmonic and English Arts Orchestra, and he has played with symphony orchestras abroad; most recently the Aurora Festival Orchestra, Stockholm. As a soloist, Andrew has performed Weber’s Concertino and Mendelssohn's Konzertstück with orchestra. Andrew regularly performs as a soloist in recitals and in his third year studying at Guildhall, he was a finalist in their Needlemakers’ Woodwind Competition. He also holds a strong interest in contemporary music; he has recorded Steve Reich’s New York Counterpoint and has performed experimental ensemble works such as John Zorn’s Cobra. Andrew has partaken in masterclasses with Yehuda Gilad, François Benda, Pascal Moragues, and Andreas Sundén, amongst others. Andrew is a keen chamber musician, and recently performed a series of contemporary chamber works in a concert curated by Thomas Adès, to celebrate the beginning of Sir Simon Rattle’s tenure as Director of the LSO. Andrew has enjoyed working in the past with Britten Sinfonia, having been a founding member of Britten Sinfonia Academy. With the Academy he performed Mozart’s Clarinet Quintet at the Fitzwilliam Museum, Cambridge. Andrew has performed at most major concert halls across the UK, including the Barbican Centre, the Southbank Centre and Symphony Hall Birmingham. He has experience in many genres of music, having performed at festivals across the UK including the Snape Proms, Spitalfields Festival and Latitude Festival with ensembles such as She'Koyokh, a Balkan/Klezmer group, Dal'Ouna, a traditional Palestinian ensemble and Lokkhi Terra, a Bangladeshi/Cuban world music collective.

Thank you so much for your beautiful playing at my wedding! It was perfect

It’s always really exciting to showcase new music composed in Cambridge [...] thank you so much for performing for us in our recital series!