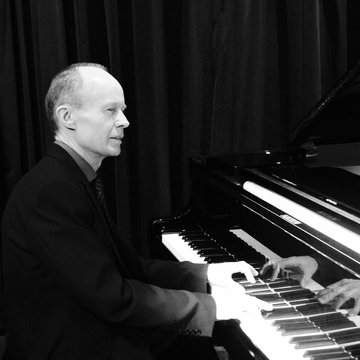 Check availability and get a free quote now - no commitment to book
From£180
Watch & Listen
About Andrew
Reviews
Home page
Andrew Christie
Like Andrew?
Watch & Listen
Watch
Listen
1-3 of 10 videos
Baker Street
When I Fall In Love
Cavatina

I am an experienced and accomplished pianist with a wide range of performance experience from weddings and corporate events to TV, radio.
Pianist
Bristol

Andrew started playing the piano from the age of six, following in the footsteps of his father, jazz pianist and songwriter, John Christie. By the age of 18 Andy had taken on the role of musical director and accompanist for his sister, vocalist, Jane Christie. Together they appeared on numerous radio sessions for the BBC. At this time Andy was also writing arrangements for Jane's frequent sessions with the BBC Radio Orchestra at the Maida Vale Studios in London and the Midland Radio Orchestra under the baton of Norrie Paramor. Since then, Andrew has gone on to compose for and perform in a wide range of ventures from jazz and folk festivals, to theatrical productions and art installations.

Thank you for helping make Alice and Ed's wedding day so fantastic. Your playing was just perfect and appreciated by everyone.

Many thanks for making our Golden Wedding celebration last Saturday so enjoyable. We all ​loved your music - your choice of songs was perfect for the occasion.

Your playing was just beautiful, and wow, to get married outside (as you know my dream!) and to also be able to hear your music so clearly was just magic. It made my day! I cannot tell you how happy we were!

Just a quick message to say a big thank you from all of us at Abbeyfield for playing last night at our party. It was perfect background music, and several of the residents and their families said how much they loved it.