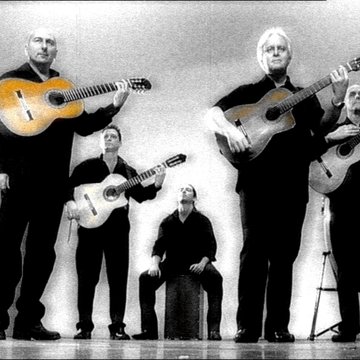 Bamboleo Band are the foremost Gipsy Kings Act available anywhere after the Original Gipsy-Kings, and operate from a UK and French base, regularly performing within the UK, Europe and worldwide. Since summer of 2008, the band have incorporated a lead singer from the Carmargue region of France, Nino De Carmargue, - a Gipsy from the original Carmargue Gipsy families of the area, and as such with a full 8-piece live act, now offer the definitive alternative to the actual Gipsy Kings. Bamboleo Band perform the full catalogue of the Gipsy Kings including all the hits....Volare, Bamboleo My Way, Hotel California. With decades of Live performances worldwide, with a high Profile Client List, Bambole Band will delight even the most ardent Gipsy Kings Fan. PLEASE TAKE A LOOK AT OUR VIDEO SHOWCASE With Main singer Nino De Carmargue from the same region as the Gipsy Kings, Bamboleo Band provide the Ultimate Fiesta celebrating the music of the music and the atmosphere of the Gipsy Kings,and guaranteed to get all age groups dancing.

I just wanted to let you know what a great success last night was & both The Duke & Duchess were very pleased with the group Andalus that came to play here at Alnwick Castle.

The band were so good that we ended up asking them to stay an extra 1.5 hours. They made our party and we couldn't recommend them enough. Thank you! Tracy & SteveYou have received feedback on 03/10/2015 Tamlyn Thompson (Andalus - Gipsy Kings & Latin / Spanish) from Tamlyn Thompson

Thank you so much and I hope we get to see Andalus play again in the near future. Take care, Sam and Matt(re roof gardens 25 aug 13)