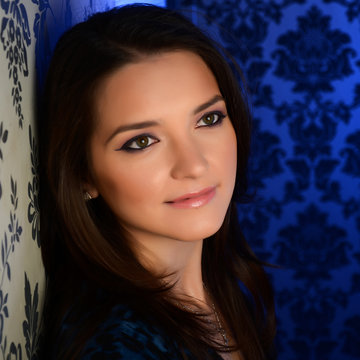 Ancuta Nite was born in Piatra Neamt, North East Romania, and began studying the piano at the age of 7. After winning a Silvestri Scholarship aged 16 she studied with Graeme McNaught at the Erskine Stewart’s Melville Schools, later returning to Scotland and the Royal Conservatoire of Scotland where she studied with Fali Pavri and Aaron Shorr on a Stevenson Scholarship and an ABRSM international Scholarship. Graduating with a first class BMus Honours, Postgraduate Diploma and a Master’s Degree she won many prizes including the Mozart Concerto Competition performing K271 the “Jeunehomme” Concerto and performed C. Saint-Saens 2nd Piano Concerto with the Royal Scottish National Orchestra as part of her final exam. Ancuta has also performed across Europe as well as in the U.K. in venues such as Edinburgh's Usher Hall, London's Purcell Room at the Southbank Centre and the New Auditorium at the Glasgow Royal Concert Hall. Ancuta has also participated in masterclasses with great pianists such as John Lill, Steven Osborne, Katia Veekmans, Roy Howatt, Hyoong Jung Chang, Alexander Korsantia and Pascal Roge. Recent performances include Shostakovich Second Piano Concerto with Glasgow Sinfonia, Beethoven’s Third Piano Concerto with the New Edinburgh Orchestra and the Warsaw Concerto with Helensburgh Orchestral Society. Ancuta has been an ambassador for Hospices of Hope (the leading palliative care charity in South Eastern Europe) since 2008 and has also joined their volunteering team in the hospice Casa Sperantei in Brasov. Her fundraising efforts have included numerous chamber music concerts with her husband, private recitals and various other performances in many venues as well as London’s Globe Theatre and she has raised over £15000 for the charity. In December 2017 Ancuta will perform in a concert in Glasgow Cathedral which will raise funds for Cancer Research UK, a charity Ancuta is also very keen to become more involved with. Ancuta is the Artistic Director of the Ardtornish Piano Retreat Concert Series which is scheduled in June every year at Ardtornish Estate, Lochaline. This year Ancuta had the privilege to invite Professor Fali Pavri (Associate Head of Keyboard and Professor of Piano at the Royal Conservatoire of Scotland) who performed a wonderful opening recital, as well as coaching pianists from Scotland, Singapore and Austria. The opening recital in next year’s Concert Series will be performed by Graeme McNaught. Ancuta is also the Official Repetiteur for Clyde Opera Group and was involved in the two recent very successful performances of Puccini’s La Boheme and Verdi’s Rigoletto. Ancuta is also the principal coach for the pianists who attend the opera course, and this year Ancuta has coached pianists who travelled from Greece and Norway. As well as performing, Ancuta very much enjoys teaching piano and she teaches at the Nite Piano School in Glasgow and at the Royal Conservatoire of Scotland.

a fine grasp of cantabile and control of a wide range of tone and colour, great variety of character...splendid performance.

Ancuta played with admirable poise and clarity, with some brilliant passage work and control...