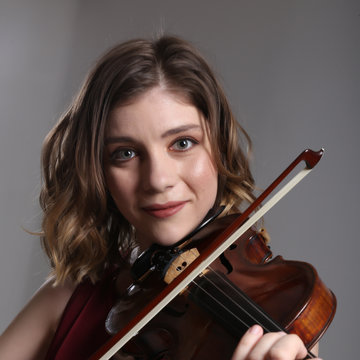 Romanian born violinist Ana Popescu Deutsch started to sing before she could talk properly. After being spotted by a music teacher from the renowned George Enescu high-school in Bucharest, she began studying the violin with her privately, aged 6 and a half. She developed her skills and started gathering prizes at national and international competitions such as the 'Lorenzo Perosi' International Competition in Italy- First Prize, Romanian Music Olympics- Special Prize, and the 'Timotei Popovici' National Music Performance Competition in Sibiu, Romania- First Prize. Singing still remained one of Ana’s favourite activities, touring the country as part of the BimBam pop-klezmer choir, and also recording 6 CDs within the ensemble and as a soloist. In 2010 she was selected to take part in a 10 recital tour in Germany alongside 2 rising stars of the Romanian opera scene. Her passion for the opera was ignited then, and today she has already led the Hampstead Garden Opera in their production of the The Secret Marriage by Cimarosa, played alongside members of the Royal Opera House as part of her Southbank Sinfonia fellowship with which she also toured Tuscany alongside the orchestra's lead singer, Lotte Betts Dean. In 2011 she became a pupil of the Royal Academy of Music, where she greatly enjoyed playing in orchestral concerts under conductors such as Semyon Bychkov, Maxim Vengerov and Marin Alsop. Her favourite opera production was the comic opera Orpheus in the Underworld by Offenbach which received great reviews after their 4 performances in the Hackney Empire. Ana is also passionate about folk music around the world especially Balkan, Irish and Klezmer, appearing on Romanian television both at educational programs and shows hosted by Grigore Lese, one of Romania’s top folk specialists at the moment. During her 2018 fellowship with Southbank Sinfonia, she was selected to lead the orchestra for aQueen Elizabeth Hall concert as part of the Ligeti in Wonderland Festival. For this occasion the orchestra had her record 2 promotional and educational videos showcasing Transylvanian folk music and how it influenced the composers from the region. Ana’s dream is to continue to enrich the lives of people with the gift of music all year round as part of the: Pro Youth Philharmonia, Arta Duo alongside which she performs Romanian-folk music and Carols in UK and France, and her beloved piano duo which spreads George Enescu’s works in halls from the UK and Romania.

I perform as a soloist on the violin, and as a chamber musician with a piano or as a string duo, as well as within our string quartet.

I always try to keep communication easy and at hand if changes occur. I try to be flexible whenever I can.

I prefer to arrive between 30min- 1h before the concert or other musical event. I or we (when we play as a group) use the time to set up our music stands and scores, warm up and have a few minutes to talk to the organiser /event manager about the concert and any specifics to have in mind.

You are most welcome to. However, please feel free to suggest any other works/pieces you would like to include in the program

Ana is just fantastic! I had booked her to propose to my girlfriend at the time now fiancé. It was a last minute booking and I had given her 4 days to prepare 6 songs to play. She learned them all soo perfectly and played them soo beautifully. All my friends and family loved all the songs she played and it was one of the highlights of the day. I am so thankful to her for taking this gig at such short notice. It wouldn’t have been the same without her playing all the amazing songs. I definitely would recommend her for your next special occasion.

I loved having these two young musicians as part of Southbank Sinfonia last year.   They contributed with a lot of fresh ideas, humour and passion to our diverse concerts, and we enjoyed having them as part of the team.    Ana did a great job in the Ligeti in Wonderland Festival as part of our Family Concert, whilst Anna was incredibly professional presenting our debut concert in Berlin, as well as leading her section during the performance.     We have kept in touch, and I am very much looking forward to future collaborations.

I thought the concert was excellent, the Enescu thrilling and so wonderfully played - I could smell the earth, if you understand what I mean - but I loved it all. A real experience. I want you both back in Aylesbury. I hope to run some extra concerts in the spring/summer, which might be on Sunday afternoons. It would be a delight to stay in touch.

Ana organised and played in a memorial musical tribute to my late wife. She devised an appropriate programme, arranged accompanying musicians and rehearsals. Then, on the day, she led the performance. This was hugely successful as was commented upon by my attendees. I have known Ana for over 5 years and seen her play in various settings: symphonic, operatic; recitals. She always plays with dedication and enjoyment.